Notice how there are only 2 blue sensors? That's because they gave up on finding and keeping Linus on one.

Trying to sleep away the discomfort.

Our last picture as a 2 person family. 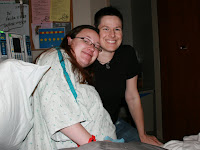 My awesome OR outfit. Stylish, no?

Taking Trina to the NICU for the first time. 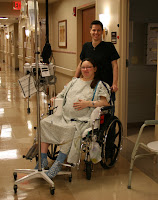 That is CRAZY exciting. Trina stayed strong CLEAR til the very end.
Amazing. and what a GREAT job she did. Those boys are just awesome.
Thanks for sharing this story.

well, i am all teary! what *beautiful* pictures, thank you for sharing!

and a belated welcome home to dexter!!

I cried at least twice during that!

awww this is so awesome! Thanks for sharing.

My partner and I have been following your blog for many many months, since before you guys were pregnant, and have been heartbroken for you many times. Now all I see is joy, courage, and strength. Thank you all so much for sharing your personal story.

And P.S. Don't get mad, but as soon as I looked at the first pictures you put up, Dexter was my favorite!

Bless you guys' heart! What an event! Glad Trina is doing better and that at least one of the little guys is getting to come home! Now is Linus would shape up and quit being a wimpy white boy and spring that NICU ;) Many prayers they all come home SOON!

You both did a great job. Thank God after all was said and done, everyone is doing well in one form or another. Also great job on the names. Im sure each one fits their personality. WOW YOU MOMS ARE A FAMILY OF 5!! That has to feel beyond good :)