Linus Is Still In The CVICU & The Big Boys Brawl

Trina and I are trading places every day or two. I stay with the big boys while she stays with Linus and vise versa. It's so hard not being together, but at least this way we get to see more of the boys. We haven't really seen each other for more than 30min every few days, though.
Linus has continued to have complication after complication so he's still in the CVICU. So much for 2-3 days, eh? It's ok. I never believe their estimates. Linus doesn't ever follow the rules of logic and planning. It's just not his style.
I left his room around 2am Friday morning to take a nap and when I got back a few hours later he was on a CPAP. Apparently in my absence he had gone into respiratory distress. He was breathing very rapidly & his oxygen saturation was low. An xray confirmed that his lungs were full of fluid. The doctor decided to try him on a CPAP instead of reintubating him. I'm so glad he did, because it worked and is much less invasive. He was on the CPAP for the bulk of the day and was able to be weaned down to a nasal cannula then nothing the next day.
Saturday night I was taking pictures of him and his eyes crossed. That had never happened before so I went to get the nurse. When we got back, his eyes were almost back to normal. She looked him over and said he was probably just tired. Uh...no. She left and when he did it again I went to get her again. She saw it "full force" the second time and agreed a doctor should see it. He said that since he's alert and his vitals are normal that it didn't appear to be a seizure. He mentioned that he may have always done this and that I might not have noticed. Uh...no. It came on suddenly and he's been doing it off/on since then. Sometimes it's both eyes, but it can be only the right or left. When it's only one eye, he can track things or look at you with the "good eye" and the other one stays stuck inward. At this point we have no idea what's causing it and are hoping it magically disappears. If it doesn't, we'll have to follow up with an ophthalmologist and possibly a neurologist.
Today Linus's lungs were wet again so he was having trouble breathing...again. They lowered his feeds, upped his current diuretic's dose and added a second diuretic. When Trina asked why this kept happening they said that his mitral valve is leaking pretty bad and that may be the culprit. They're going to start him back on his heart failure medicine. The hope is that it will give his heart a rest and the newly remodeled valves will heal faster stopping the leakage. My poor boy. Will this never end?
These pleading eyes kill me. 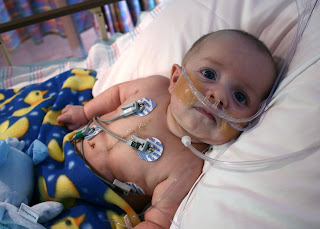 He keeps a firm grip on my finger all the time. Half the day is spent with my arm half numb and cocked at a funny angle just so he can reach it easier. 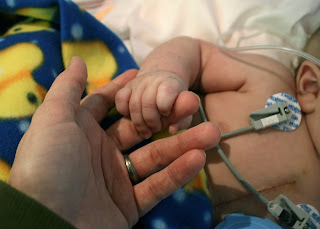 Getting a bedside echo while hooked up to the CPAP. How uncomfortable does that thing look? 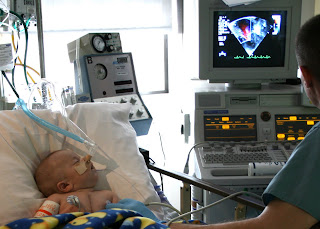 Sleeping much easier after the CPAP is removed. 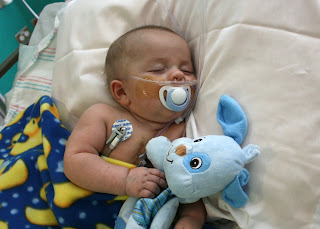 We don't have a mobile so Linus has taken to watching TV. 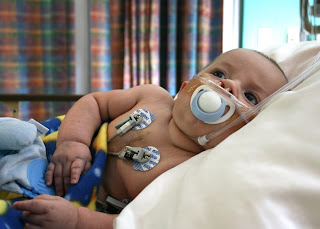 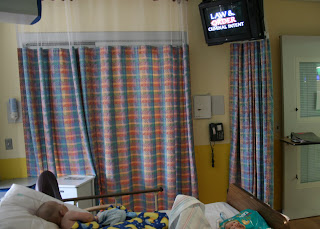 Both eyes crossed in. 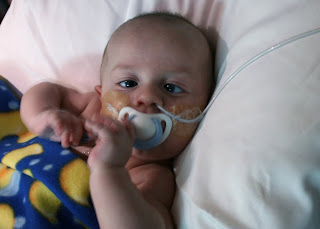 One eye crossed, one eye looking at me. 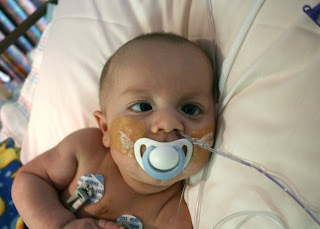 Earlier today Dexter was hanging out on his playmat and I was holding Simon. I put him down next to Dex so I could run to the restroom. I don't get much time to myself, but I should at least get to pee alone, right? The boys started squealing and there was a thumping noise. What the hell? When I get back out to the living room I see them beating the crap out of each other. Apparently they both want the funky hanging zebra-like toy and it has made them forget their manners. I grab the camera, of course, and snap a few pics of the fight. Then I say "Boys! What are you doing?" and they go still. Both of them put on their most innocent faces and look at me like they don't know what I could possibly be referring to. Brats. :) 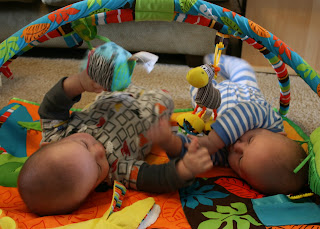 "Yes mother? We were just quietly discussing how much we both like the zebra." 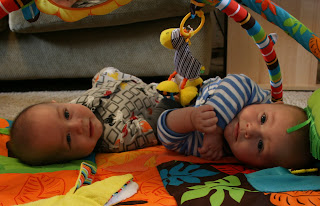 Poor Linus. Poor moms! I hope that the complications slow down and then stop, and he's able to come home soon. <3 <3 <3

Thinking of your family and sending healing restful thoughts your way. xoxoxo

Sending comforting hugs to everyone ))) Please God give this family a break. Please heal Linus, help him get healthy, and get back home with his family. Amen.

That just breaks my heart. And that little hand holding your finger. uuuh. heart strings.

I don't want ANYMORE complications from that little man. I don't like this new "side effect" and I certainly don't like that nobody seems to have any idea why he's doing it.

Praying for all of you.
Thanks for the update. and the CUTE CUTE pictures.

the first pic of linus - sigh :) - and the 2 boys fighting - ALL TIME CLASSIC! for what its worth, i love to follow your story / blog! thanks for sharing so much with us. :)

Is Linus still on pain medication? That can cause neurological symptoms ... I've seen it bring on some pretty bizarre actions although the crossing eyes is a first. I hope that you are all together at home real soon!!

Well, you sure know how to give us back our smile after having us in tears with the explanations of your ordeals with the medical part of your lives. Looks like the big ones need Linus back so he can run away with the toys they're fighting over! And again, thank you for taking out some of your precious time to keep us updated.

Hilarious about the boys fighting! Thank God you have moments like that to get you through all that is going on with Linus. My Father In Law has a lazy eye, it looks like the 2nd photo all the time. It's freaky. Anwyay, continuing to pray for Linus, and for you and Trina too, the stress and strain has to be hard!

Poor Linus!! I hope things start to get easier for the little guy. So sad to see him there. Hope you guys are doing alright--that is a lot to go through. You guys all need to catch a break!!!!

LOL @ the fight pics. So cute. Can't wait to see how they interact as they get older.

:( the hospital pics are just heartbreaking. thinking of you all and hoping linus is out of there, healthy, soon!

the pics of s&d fighting on the mat are *adorable*!!

Praying for Linus! I can't wait until he can join his brothers in their brawling!

Your boys are beautiful. I'll keep all of you in my prayers with extra for little Linus. I hope he is well soon and your little family is all together again.

As a brilliant woman once said to me, at what point do you ladies get to cry UNCLE?!! Poor little Linus, but what a Master Sensei this little man is, he's a rock star - and so are both of you.

Your boys brawl was humorous, I'm sure the first of many!

such heartbreakingly beautiful boys. thinking of and praying for linus and your fam.

Oh sweet Linus. His photos always make me smile and cry at the same time. Your boys are so beautiful. I hope you're all together at home very soon.

I wanted to thank you so much for your advice about getting a special team to place my son's IV lines in the future. I didn't even know they could do that! I can't believe you took the time to tell me this with all your sweet son Linus is enduring right now. I am glad he got through surgery well and I hope he is able to go home soon. He (and his brothers) are just precious. I noticed Linus has an NG tube. My daughter Sophie might have to get one placed in the near future because she is just barely gaining enough weight (she only eats 12-14oz/day). Does he try to pull it out? Does it affect his ability/interest in eating orally? Don't answer unless you have some time I know you must be so incredibly busy right now! Hang in there, you will be in my thoughts!

Thinking of you all...

I'm a lesbian heart mom too. My daughter was born with multiple VSDs, an ASD, and a PDA. They were fixed via open heart at 4 months, and she had complications from that surgery (pericardial effusion and attrial flutter) that kept us in the hospital a total of 20 days-- 10 days in the PICU. I've always been frustrated by the lack of support there is for heart parents for the side issues that come up when you have a heart baby-- particularly the lung and feeding issues, not to mention the oral aversions and PTSD/white coat syndrome, whatever you want to call it from being poked, prodded, woken in the middle of peaceful slumber, and generally abused in ways you can't understand by people who are actually only trying to help you.

I don't run into many heart mamas, but I want to offer you my hand in friendship if you're interested in keeping in touch. I have been there through the frightening "blue" episodes, the midnight trips to the ER sure that your baby is going to die, the disbelief that you would be allowed to take such a sick child home and the fear that something you do or don't do will cause his death, the exhaustion-- both yours and his, the lack of energy to feed or digest.

At two years old my daughter has been through 4 surgeries (only 1 for heart-- the others for other fixable birth defects) and is still Failure to Thrive (she's tiny but healthy) and only a little behind physically. I'm always happy to share any knowledge I've gained through this ordeal. The scars remain (both physical and emotional-- for both her and me), but I believe it HAS made me a stronger mother, a better advocate, and increased my love for her.

Sending you light, love, strength, and, if you'd like, an extra hand to hold.

I'm getting so many flashbacks of my father-in-law's stay in the hospital this past summer. It was horrible. I can't believe this is happening to a baby :(