Linus has been in the hospital for 6 weeks now. The impact this has had on us, our family, my job and Linus himself is nearly indescribable. That being said, we've had so many people rally around us to do their very best to ease our hardships. I can't put into words how grateful we are to everyone who's taken on bits and pieces of our burden. We are forever indebted to so many.

This week has brought on big changes for our little guy. It was decided that it's make or break time for Linus. He needs to show his medical team what he's made of. The plan is to sloooowly and gently move him from his invasive therapies to a protocol he'd be able to come home on. If he can handle this, great, wonderful, stupendous, even. If he can't "fly", it's back to the OR he goes. No pressure, right?

He was extubated last Tues and although he's struggled a bit, he's been able to hold his own. They were able to graduate him off of the CPAP, which he hates, onto a high flow nasal cannula. This setup still gives him the support he needs, but in a much less invasive way. He's also had his Methadone and Ativan doses lowered a bit. He had pretty bad withdrawal symptoms for a few days. It was heartbreaking to watch him cry and thrash around. He was absolutely inconsolable during these fits and would usually require a PRN dose of methadone to calm him down. Then like magic, Sunday, he was "our baby" again. He smiled often and Trina even heard him babble a little for the first time since Feb. At one point he stayed awake for an hour straight. Even on this lowered sedation regimen, he usually he only comes around for a few minutes here and there. He's completely exhausted from having to breathe on his own. They've also been able to start a continuous drip of breast milk into his stomach to get his digestive system moving again. Over the past few days they've gone from 1 tsp/hr up to 3 tsp/hr. He's only vomited once so things are going pretty smoothly. The 2 daily issues we have with him are his fluid balance and his potassium. He nearly always retains too much fluid and always always has too low a potassium level. His daily chest X-rays show his lungs haven't changed much one way or the other. They're still "wet." He has an echo scheduled for tomorrow and I'm both nervous and excited to see what it might tell us.

Now that he's off the vent, we've been able to start physical therapy sessions. He has zero muscle tone. It's like having a floppy newborn again. When we sit him up, supported of course, he can't pick his own head up. His chin stays on his chest and his shoulders are slumped. It will take a long time to get him where he needs to be, physically, but at least we've started the journey. Over the past few days, he's started taking a pacifier again. This is a good sign, because he was outright refusing it after having the vent tube and/or an oral-gastric tube in his mouth for so long. This can lead to oral aversions which can translate into feeding issues. This wouldn't be the end of the world, but frankly, this kid has enough issues already.

Simon and Dexter are doing great. Their smiles and laughs fill me with joy down to my core. I can not get enough of their sweet snuggles. I could just squeeze them til they pop. :) Having them light up when I come into view is so good for my soul. They really make this difficult time bearable. Watching them play together and have little babble conversations with each other could melt the coldest heart.

These boys are nearly opposite in everything they do. Dexter caught up so they both have 2 teeth now. Simon drools relentlessly and Dexter may have a dribble every now and again, but nothing major. Simon sits like a champ and is getting more stable with his assisted standing. I've been working with Dexter on his sitting skills and he does pretty well as long as you hold his hands. He still has absolutely no desire to put any weight on his feet, so standing is a no go. Today Trina introduced them to sweet potato. Simon thought it was great and Dexter was wondering what went horribly wrong with his oatmeal. You know how they say that opposites attract? I think this may be the case with Simon and Dexter in the most literal sense. If they are anywhere near each other, they're touching. If they are semi-near each other, they find their way to each other, then touch. It's like a constant game of tag where they're both "it."

This is Linus with a vent tube. He's had this one and others like it breathing for him since March 11th. 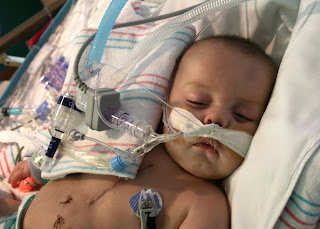 This is his "snorkel." He absolutely hates this uncomfortable contraption. 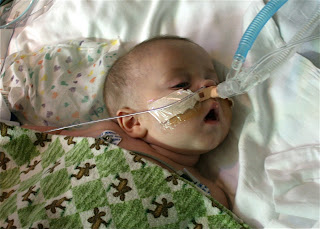 This is the high flow nasal cannula. He tolerates it a lot better. 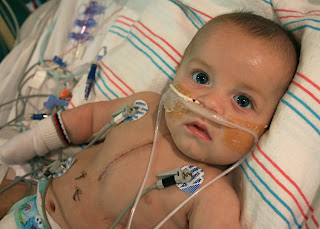 Simon was super excited about oatmeal time. Look at those teeth! 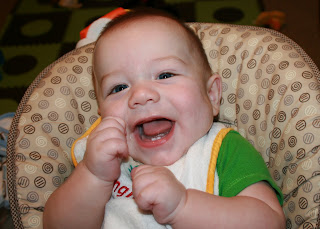 Dexter had oatmeal all over his face and he couldn't have been happier about it. 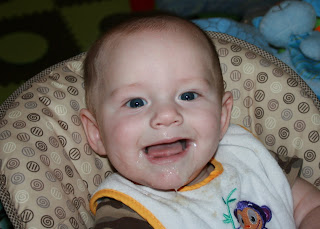 Simon can sit up like a big boy. Notice Dexter's hand on his foot, he's a spotter. :) 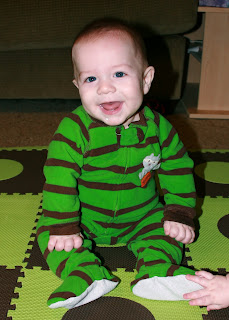 Dex may not want to sit or stand, but he does the "push up" position like a champ. 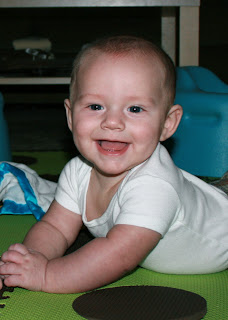 This is how they start out sleeping, on their backs with lots of personal space. 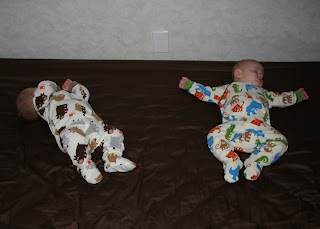 Less than 30 minutes later they're like a squishy baby yin yang. 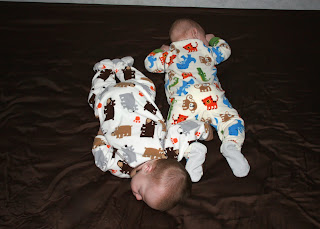 Dexter: Hmmm, I sure would like to play with that giraffe.
Simon: Nom Nom Nom 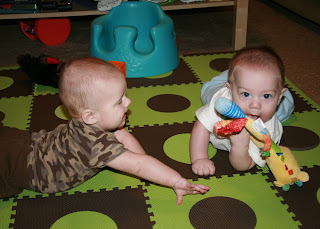 Dexter: Here, let me show you something...
Simon: Ok, I suppose we can share. Nom Nom Nom 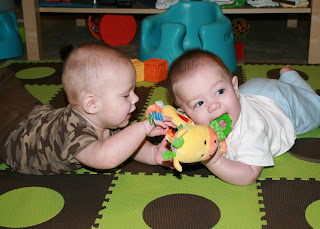 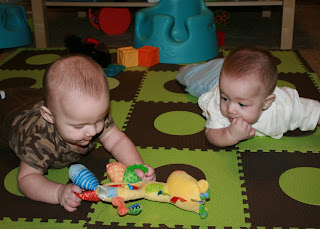 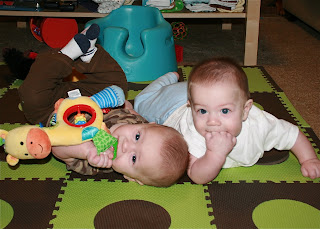 Aaaw, how cute!!!!! So great that Linus is getting better and better.

I pray for Linus and your entire family every day. You have such handsome boys!!!

The pictures are incredible- Hugs to all!

Oh those boy are all so adorable! Glad to hear Linus is improving.

Love it!! So glad to hear an update. I'm glad you're able to see improvement. Fingers crossed for tomorrow's echo.

Hoping that Linus continues to improve, and that it means coming home and not a trip back to the OR.

They are all so cute! I am so glad to hear Linus is on high flow nasal cannula. Praying he can be weaned down to a regimen that can be managed at home and he can avoid the OR.

Your pictures show such happy little boys!!! Hoping and praying Linus "flies" on his own so he can come home soon!

I HEART your boys, they are so stinkin cute, perhaps its your commentary as well :) Glad to hear Linus is making progress - progress is progress right??

Amazing update! I'm so glad to hear that everyone is doing well and Linus is improving.

I'm just happy to hear some positive news. Some improvement. I can't believe it's been 6 months.
I'm glad that you guys are feeling some support. I think we all wish we could do more.

Those 2 at home are so stinking cute together. Even from behind those tubes I can see how much Simon and Linus look alike....it makes it hard to see pictures of Simon sitting up and healthy. I can't wait to see Linus tube free and smiling on your living room floor. :)

Always thinking about your family. Keeping you in my thoughts and prayers.

Hope this regimen works for Linus so he can finally come home. Babies are so funny how they find a way to get all snuggled up next to you. I love it.
Linus looks a lot more comfortable with that nasal cannula. Good luck on that echo!
-Shirin

Oh my gosh! I LOVE your conversation captions for the boys. :) So happy to hear that Linus is doing better! I will continue to keep him and your family in my prayers.

We used to call the CPAP "Gonzo nose." I'm so happy that he's on cannula! So much more comfortable.

I've told my husband all about your kiddos. (We also have triplets, except all girls and 5 years older) He keeps asking me how they're doing... I appreciate the update to pass along so he can get off my case ;) We're thinking of you guys and hoping for more good news!

Haha I love the narrative! Adorable!

So happy to hear Linus is fighting with all his little might and making progress. You go kidda! Simon and Dexter are soooooo cute! I love the fact they just want to touch all the time, adorable! Strong wishes to you and your wife - those boys are so lucky to have you both xx

the two sleeping photos might just be the cutest thing i have EVER seen!

Glad you have two healthy happy boys to come home to. They are beautiful. Linus is beautiful too-- such a strong spirit. I think about and send him positive energy all the time.

Your boys are gorgeous! (The ones of Simon and Dexter are too sweet for words! What nice brothers!)

I think about you guys often, especially of Linus and of how his health impacts the rest of your family. I can't imagine how difficutl it must be. I want you to know that my warmest thought are with your little boy and the rest of you.

All the best,
-Allison.

You have such a beautiful little family! Thank goodness little Linus is doing better. I keep him in my thoughts often.

I keep you two in my thoughts as well. I can't imagine going through what you are dealing with and you seem so strong. Those boys are lucky to have you two.

Thank you so much for sharing your story. I can really relate. I have twin girls born two months premature. One is finally home, but I still have one in the hospital at the Houston Medical Center. I will pray for your family and especially Linus. Your boys are absolutely adorable! I also write a blog. http://lily-and-chloe.blogspot.com/

I'm so glad that Linus is starting to improve a bit. I'll keep sending prayers his way for continued health and healing. The photos of the boys sleeping is one of the cutest things I have ever seen. Totally precious!

Every time I see your pictures I'm blown away by how gorgeous your boys are. Love the magnet baby phenomena!

Thinking of you all and praying for Linus's continued recovery.

Oh the drool! :O)
One day at a time, I think about your family everyday and share your story with others. I will continue to pray for all 3 of the boys, they are getting so big and such cuties! Give them squishes for me. Leslie

I'm cheering for the good news! Slow, but steady.

Those sleeping pictures of D+S are too cute!