Well, our boys turned 2. I'm not sure how it happened really. It seems that just a moment ago they were tiny, little babies. Now they're kids. Kids! We had their birthday party at the Children's Museum. They LOVE that place so it was perfect. Trina meticulously planned every detail and hand made almost everything. It took weeks of diligent crafting. The actual party was over in a flash. My memory of it is a blur of primary colors, laughing, running, crying, playing children. Adults scattered about, trying to corral or herd various children and then poof, it was over. I don't remember a single conversation I had with anyone. I'm told people had a good time, so that's nice. I didn't think the boys had enough time to play, but when we were leaving, none of them cried. They always cry when we leave so I know they didn't share my same disappointment. They had a great time and really, that's the only thing that matters to me. 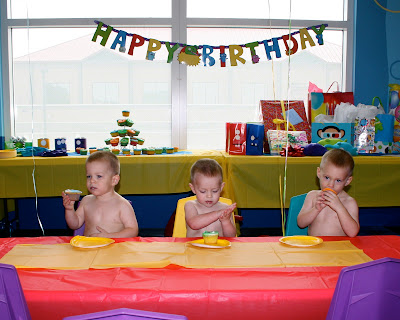 I took off their nice shirts so they wouldn't be stained. I actually brought specific "cupcake eating shirts" but decided naked cupcake eating was fine. We don't stand on ceremony around here. Simon and Dexter dug right in. Linus touched his once, realized it was messy and started wiping his hands and yelling for a spoon. 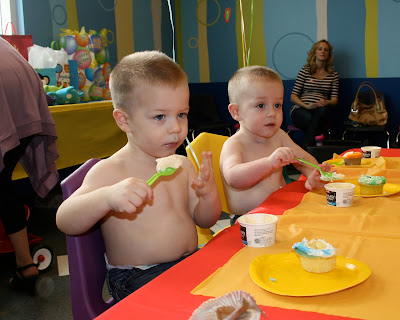 Mmmmm, ice cream. Not sure where Dex ran off to... 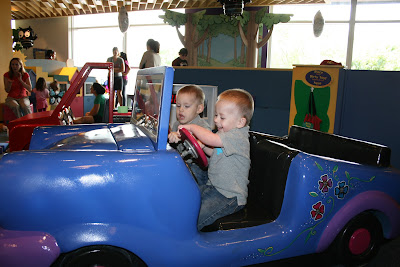 I love the look on Linus and Dexter's faces in this pic. Linus is driving like a mad man and Dexter looks terrified. 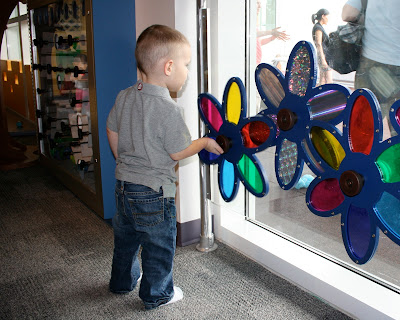 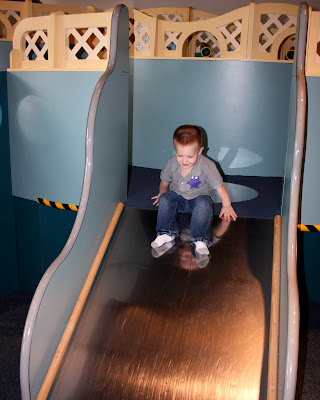 Simon sliding all by himself. I remember when I'd have to hold him upright so he didn't fall back and hit his head. 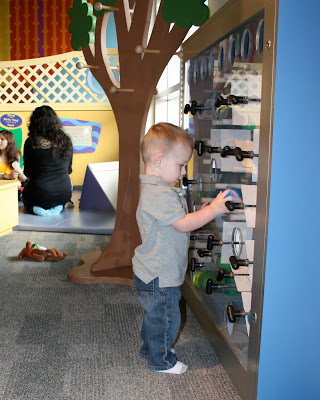 Linus putting balls in the holes and watching them bounce around as they fall to the bottom. 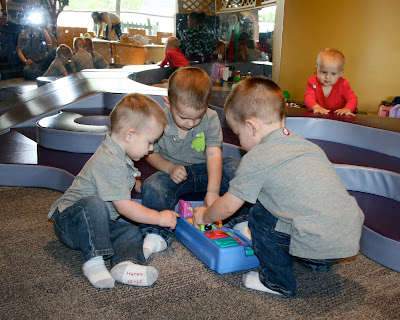 Wouldn't you know the only thing they all wanted to play with was a little baby toy. All 3 of them sat still for like 15 minutes with this thing. I may need to buy one... 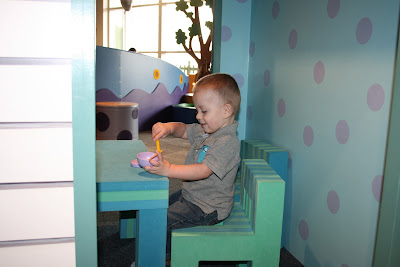 Linus having a solo tea party. he ket stirring the tea, taking a sip and saying "Mmmmm." 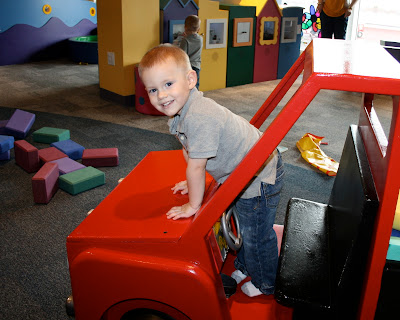 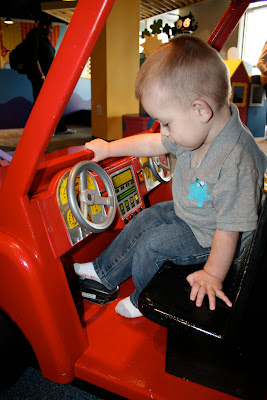 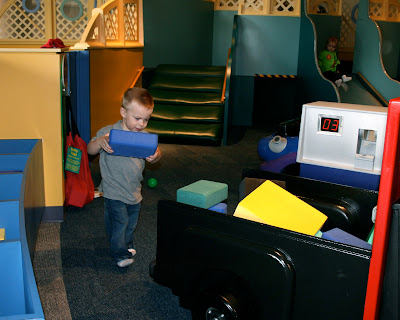 Dexter and Linus took turns driving the truck while Simon loaded the bed. 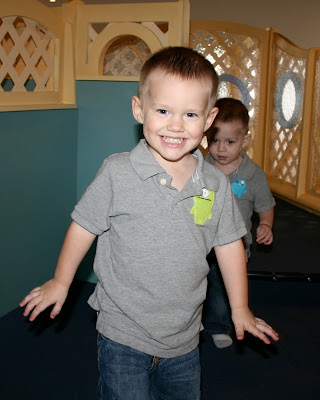 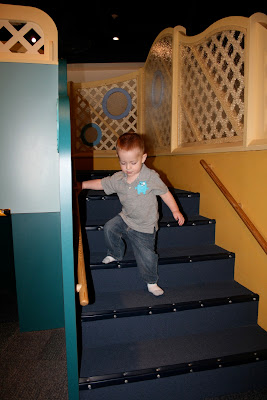 PT is definitely paying off. Linus can take the stairs like a champ! 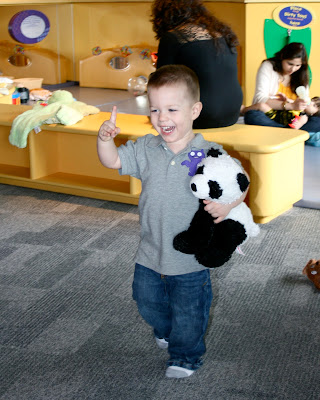 Simon has a little stuffed panda that he is VERY attached to. He wanted to bring it along, but I wouldn't let him for fear that he'd get lost and Simon would be heartbroken. Well, Simon found a big stuffed panda at the museum and he was ecstatic! He was yelling "Pah!" and signing panda over and over. He carried it around the whole time we were there. I started getting scared that he would be sad to leave this surrogate panda behind. Luckily I was able to distract him as we left. Whew, crisis averted. 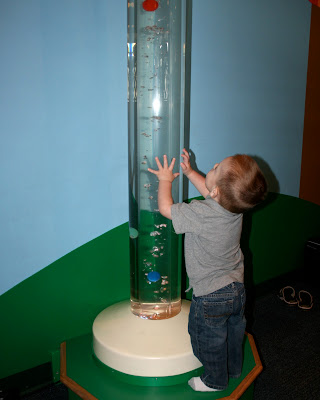 Linus in awe of the giant bubble tube. He kept signing "ball" and "bubble." 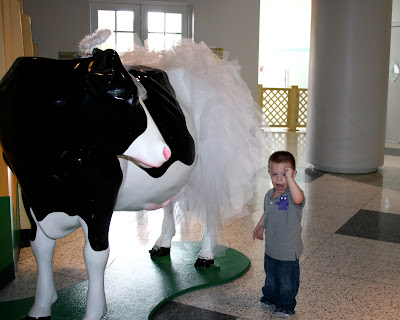 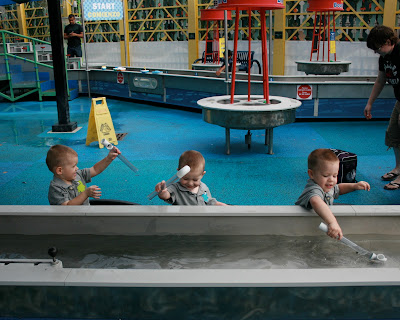 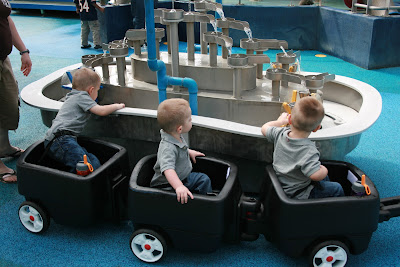 Driving around in the choo choo wagon playing with water. 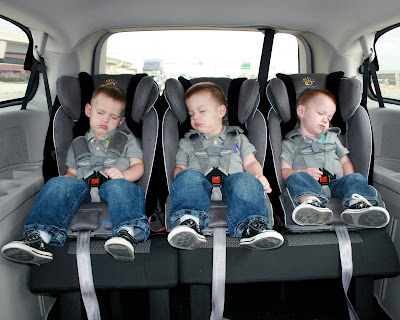 Happy Birthday Boys!!! Looks like you had a blast! On a side note, did you paint your choo choo??? I'd love to give ours a make over b/c we have the older model and it's a bit faded and blah looking.
Here's hoping for a healthy & uneventful year for you guys!!!
Renee L.

Looks like it was a wonderful day! I can't believe they're two already, I can't imagine how you guys must feel!!

It just blows my mind that they are these big 2 year olds.
I still think of them as tiny babies.
Looks like a great day to celebrate their birthdays.

and yeah, i came to ask about the choo choo too. dang, now i wish i still had ours so i could paint it! of course, i wouldn't be able to pull it anymore, heh.

I can't believe they are so grown up! Sounds like a beautiful party!

Looks like a great party. I am with everyone else--when did they grow? How is it possible they're 2? They look so big. Still as cute as ever.

They grow up so fast! (It's not fair is it??!)
I loved how you stripped off their shirts for the cake! Lol it reminds me of my daughter's first birthday, we stripped her to her diaper and had cake on the kitchen floor! Lol! It was the easiest for cleaning!

They are so sweet passed out at the end of all the fun.

OMG I cant believe they are 2. They all look great and of course super super cute. I just love seeing your updates. Did you guys get a new wagon? I thought you had a tri-color one before. Anyways - Happy Birthday Simon, Linus and Dexter!!

Hello, I have finished reading your blog from start to finish. The hardships that you have faced and triumphed is amazing.

My wife and I are just starting the TTC journey, and she came across your blog. Thank you for sharing your experiences.

The boys are adorable, and I'm happy to hear Linus' last surgery went so well.

The Cheerio fiasco was cute. I cant' wait to have my own stories like that (one not three, you are amazing to be able to keep up with triplets.)

I can't believe they're two! We are celebrating the same, next week!

I am updating the blog listing at Lesbian Mom. Obviously you are no longer TTC! Can you get me an email address for your blog?

I'm catching up on blogs after a very long break taking care of my own trips. SO happy to see the boys are doing well. I know it was scary with Linus for a long time, and he looks like he's doing awesome! So thrilled for the 5 of you. Happy belated birthday boys!