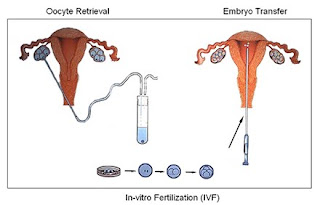 So much has happened since our BFN and I have had zero motivation to post.  I kept thinking, "Man, I should really write about this", but I never did... This may be a long one, feel free to skim until something catches your fancy.
I finally went back to work again after my wreck. It's exhausting! 3.5 months off really affects your strength and stamina. I did nothing but work and sleep the first week back. I could barely stay awake long enough to eat. Luckily it's getting much better now.
The day after Trina started her period, we had a tearful consultation with our wonderful RE. He said we basically had 2 options. We could do a 3rd injectable cycle, then move on to IVF if it didn't work, or we could just jump to IVF. He said first 3 injectable cycles all have about the same rate of success, but starting with the 4th, the success rates drop drastically. Having lost all confidence in basic infertility treatments, we chose to jump to IVF. He scheduled Trina for a hysteroscopy so he could look at the exact spot he'd place the embryos. If the spot was clear, we could start this cycle. If the spot had scar tissue that needed to be removed, we'd have to sit out a cycle so she could heal. The procedure showed that she didn't have scar tissue, but that she did have a uterine polyp that had to be removed. This caused some cramping and bleeding for a few days, but wasn't too terrible. At her post op appointment, Doc said the polyp was small enough that we could start this cycle if we wanted to. Between my work schedule, the holidays and a planned trip to Arizona in Jan, we decided to hold off for now. She'll call them when her Dec cycle starts to begin suppression. In the mean time, I plan to do an obsessive amount of research, pay off as much debt as possible, try to decide who's eggs to use and win the lotto if at all possible...
We went to a patient education seminar dealing with a spectrum of infertility causes and treatments put on by our fertility clinic. They were giving away a free IVF cycle at the end. We didn't win, of course, but it was nice to dream. The seminar was great. The doctors are all so laid back and answered everyone's questions in detail. It was so much fun to people watch there. Infertility really affects a wide variety of folks. I liked listening to how people phrased questions. Some of them acted like the questions were hypothetical. They'd say "What if "someone" had a blocked tube blah blah blah", like they were asking for a friend or out of pure curiosity. I was thinking "You're standing in an infertility seminar, we know it's your tube that's blocked, it's ok, we're all in the same boat." Then there were the people who were over sharing in a major way. One girl rambled on for 5 min about her whoas. Apparently she knows her boyfriend isn't the problem because he's gotten 2 other girls pregnant and she's never been pregnant even though she's never used protection and that's how her cheatin' ass ex boyfriend gave her chlamydia. Wow. Then there was the guy who guzzled wine throughout the whole thing and cringed at all of the pictures and diagrams on the power point presentation. He says, slurring,  "I've had quite a bit to drink so I'll be honest, we got mobility problems, her parts are fine..." It was hilarious. Who would have thought hearing about infertility would have made for such an amusing night?
Posted by Robbie at 8:38 PM

Congratulations on your decision...very exciting. I know you are ready to put the TTC chapter of your life to rest and be moms. I will be watching to share your good news! PS i laughed my ass off at the "oversharing" of folks at the siminar...people are funny.

lmao... i love the stories from the fertility education session!!

*fingers crossed* for you two...

All the best for the IVF :) I really hope this will bring you the baby you've been waiting for soooo long...

Your description of the IF seminar had a David Sedaris feel to it.... Very funny stuff.

So glad you are able to work again. That was one nasty accident you had.

And yay for IVF. This will work and you can out of TTC limbo.

I think it's great that you are moving to IVF. It was the only thing that worked for us, and given the cost of injectable cycles, it's almost like you may as well just roll that into an IVF cycle with much higher success rates. Hopefully all you will need is one cycle - how crazy is it to think you may only have ONE cycle left before you're mommies? Wishing you both the very best.

Wow, thanks for sharing the stories of the over-sharers in your seminar! Truth is much stranger than fiction, for sure.
Glad you're feeling better and are on the road to complete recovery after the accident. And I'm really excited for you ladies and your decision to go the IVF route! Sounds like you made a smart choice.

I'm glad you are both at a place where IVF feels like the right thing to do. It also sounds like you are being realistic about everything on your plate--recovering, holidays, travel--and not jumping the gun. This is all good news.
Best of luck!

Hilarious. I wish I could have been there too. We could have giggled and whispered about them all.

I haven't felt much like posting or reading since we started into this either and I'm not sure why but it's interesting that you feel it too. Here's hoping you win the lotto and have a perfect IVF cycle with a babe to show for all your efforts. I'm excited for you!

Glad you are feeling better and I hope work gets easier.

I just found your blog and I am excited to continue to read it. I wish you so much with your IVF cycle.

I am dying for your update!

I hope you have had luck.