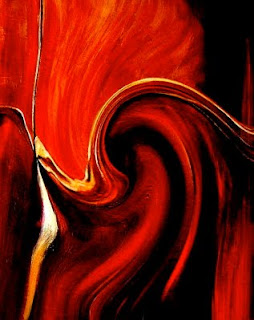 Trina continued to lightly cramp and spot Friday and Saturday. Sunday as I was finishing my work day, I got a call from Trina. She was crying. She had started bleeding and her cramps were getting worse. She'd called the "on call" nurse who had told her to lay down, drink water and call back if it didn't stop or it got worse. I rushed home with a feeling of dread in my gut. I asked if she'd POAS. She said she hadn't and didn't see the point since she knew she was losing it. We decided she'd POAS first thing in the morning. If it was positive we'd call the Dr office to see what we should do. We held each other and cried. Our faith in this cycle was completely gone. I tossed and turned all night. Questions filled my head and made sleep impossible. How could this have not worked? What are we going to do? How long until we can do an FET? How will we afford it? What if that doesn't work?
At 4am Trina woke me up and told me I was going to be a mom. She'd taken 2 tests and they were both positive. I asked her if she was still bleeding. She was, but not as much. I wasn't ready to revive my hope, but she seemed so happy so I kept my fears and negative thoughts to myself. We called the doctor's office as soon as they opened and explained the situation. The nurse said since the test was positive we could come in for a beta but not to get our hopes up. The number could be very low or dropping and still read positive on a HPT. We got ready and went straight in. When we got there, our nurse seemed to have completely switched gears. She was saying the bleeding was likely caused by a combination of implantation and Trina being on her feet for 5 hrs at work. She drew the blood, told Trina to stay on bed rest for the day and gave her a note calling for light duty when she returned to work. We would get a call around 3 with the results.
I hated leaving for work with everything so up in the air. We wouldn't be together when the results came in. What if they were bad and Trina was all alone? Would I be able to finish my shift or have a complete breakdown? All day I mentally prepared and bargained with myself. How low could the number be and still leave me with a sliver of hope? 100 would be nice. That's a nice strong singleton number for 9dp5dt. what about 60? Would 60 freak me out? How low a number shows up on the brand of HPT we used? The test line was only about half as dark as the control line so the number probably isn't very high. I could expect at least a 50 right??
At 3:38 I sent a text to Trina asking if there was any word. I knew if there had been, she would have called me immediately, but I was getting impatient. I was checking my cell constantly. A few minutes later I mindlessly answered the work phone and was greeted with "Congratulations it's 221!" My brain froze up. "What??" "221! Our beta is 221! We're having a baby!" I went into shock. I felt like crying or throwing up or both. I was SO not expecting that. Concentrating on work was hard after that call, but I made it through. We have our 2nd beta on Wed and our 3rd on Friday. I still haven't fully accepted that this might actually end well for us. I wish she'd stop bleeding. If tomorrow's beta doubles maybe I'll have some peace of mind. More than likely, I'll just start worrying about the next thing...
Posted by Robbie at 7:24 AM

ack!! i couldnt wait for the results, so i scrolled to the bottom first!! congratulations mamas!! 221 is a really strong number!! im thinking the spotting is due to *both* of your perfect blasts nestling in! :D

Oh god. I hate the bleeding. I am hoping for you and hope it stops and everything settles down!! Congratulations on such a good number!

Stupid emotional rollercoaster! I'm so so happy for you two! 221 is a great number!!!

What a crazy couple of days! 221 is great! I am going to be waiting for you post tomorrow. This could be it!!

Excellent number mamas! I understand that early blledibg is common with IVF.... Still scary though. But with a number that high, I am betting you have a nice healthy string pregnacy started there.

Congrats! Hang in there. We are here for you!

What a beautiful number ladies! Congratulations!

OMG THAT IS GREAT NEWS!!!!! wow we are so happy for you both!!!!We are sending happy healthy positive thoughts to you both.

oh wow...what an emotional rollercoaster you've both been through!!!!! i felt the highs and lows just reading through your post! I am so glad to hear the beta came back at 221. that is HUGE!!!! Im betting you have twinsies in there. :) Please keep us posted on the next beta, and you know we all have our fingers crossed for you!

Congratulations! What a fabulous number. Thinking sticky and doubling thoughts for you. I'm so happy for you both.

I was hoping that this story would end this way!

Right now you are pregnant and enjoy it. I am sooooo excited and trina put your feet up and REST REST REST!!!!!!!!!!!!!

tears of joy for you over here! SO SO SO many congratulations, mamas! I am delighted beyond words for you! YOU ARE PREGNANT!!! YAY!!!!!

First, CONGRATULATIONS!!! Great number!!!
Second - are they testing her progesterone?? If not, get it tested ASAP and STAT. :)
YAYAYAYAYAY!!!!!!!

congrats! i'm crossing my fingers and wishing you guys all the best. you are going to have a beautiful baby (or two!)

Congrats on the BFP!!!

I have such happy chills and tears for ya'll!!!!

And am sending all the super glue thoughts n the world!

I just totally teared up! You two deserve this so much. My totally unscientific gut feeling is that you've got twins burrowing in. Stick, stick, stick!

This post is making me cry. It sounds so much like some of the early days for Cat and I. That was a scary and nerveous time and I'm glad to be past it. So do happy that everything turned out like it did.