Trina's cerclage went pretty well. She had 3 days of cramping and spotting, but no major complications. The procedure itself went great. She took the weekend off to recuperate then had to take Mon & Tues off due to severe nausea and vomiting. After a few days of mild issues, Trina's back to full force vomiting and heaving nearly all day every day. She has now busted blood vessels in both eyes, eyelids and cheeks. Our cerclage recheck appointment was supposed to be tomorrow, but the nurse was so worried about the pressure all that retching was having on her newly stitched cervix, that she changed it to today. No complaints here. We wanted to see the babies. They checked for them with the doppler after the procedure, but with 3 how can they be sure they picked up each heartbeat and not just one of them 3 times, ya know?
Today they measured Trina's cervix and it was "good", didn't catch the actual number, though. The babies had their nuchal folds measured and they were all great. They want to see numbers under 2.5 and theirs were 1.1, 1.3 & 1.4. The blood tests that normally go along with that screening are not applicable for triplets. Apparently not enough data has been gathered to determine what are "good results" and what aren't. The babies themselves are growing right on track. Boy A is 13w4d, Baby B is 13w1d and Boy C is 13w3d. Did you catch that gender drop there? That's right, our identicals are boys! Baby B was feeling a bit shy today and wouldn't let the doctor have a good look. She's pretty sure we have 3 boys, but no matter how much she tried to persuade the little one, she couldn't get a definite answer. Perhaps Baby B won't be quite as modest the next time around. Until then, it's a surprise. :)
The doctor has ordered Trina to be on modified bedrest and out of work for good. Trina's job requires her to be on her feet for most of the day and even though she cut her hours down, doc says "no more". She's feeling very protective over Trina's questionable cervical competence and doesn't want anything to compromise it. Secondly she wants the violent retching to stop. The pressure it puts on the cervix is far too great. It also robs Trina and the trips of much needed nutrition, which can be devastating to their growth. She ordered a Z0fran pump that will be delivered by nurse to our home tomorrow. Z0fran pills did nothing for Trina, but apparently sometimes the pump is still the answer. I certainly hope so for all their sakes.
And now for show and tell!
13 Week Belly 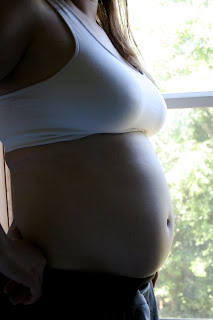 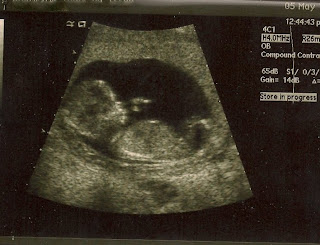 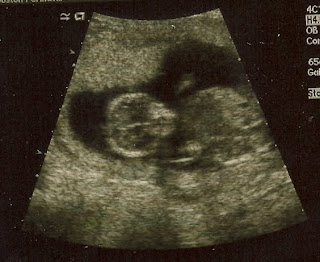 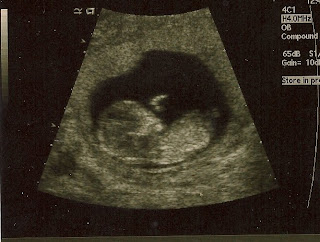 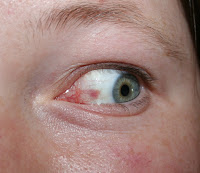 That's funny, I thought read "boy" but re-read it and somehow saw "baby". Then I read on and saw you point out the drop. :)
Congrats on identical boys! How fun!
So sorry for poor Trina in all that she's going through but just so happy that it's because she's pregnant! When will you possibly learn the sex of Baby B?
OMG - can you believe you have 3 babies in there?!?!? Perfectly formed little babies.
Still just so happy for you, and cannot WAIT to read your blog as it evolves into a blog of parenting triplets. :)

Congrats on finding out about the boys :) I hope that the pump works. So sorry to hear that the vomiting has made a fierce comeback.
U/S looks great. Hopefully you will be able to find out what gender Baby B is. May surprise you if it's a girl :)
I'm really happy for you guys and enjoying all of your updates.

Congrats on the 2 boys-- very sneaky way to tell :). Hopefully the other babe will cooperate next time. That constant puking sounds awful. I also hoping the z pump works some magic. I hope the bedrest also does the trick cervix-wise.

You're so sneaky! Love it! Congrats on having 2/3's of your clan figured out.

You all have so much going on with bedrest and barfing- sending calm, unsick thoughts both of your ways.

I am so sorry ! That is TERRIBLE that she is still so sick.
I hope the pump works. I'm also glad that her doctor ordered her to stay home.

Woah 3 boys!! You will have your hands full! Congrats, it's so wonderful.

OMG my nausea was so much worse with a boy pregnancy- I feel for poor Trina! Heres hoping the pump works and all goes well! Congrats!

I'm happy to hear that Trina will be on bedrest and on Zofran to help the violent heaving. That should help a lot!

Wow congrats on your two boys! How exciting! I hope the awful nausea stops for Trina soon.

Glad teh operation was a success and I hope the pump does the trick. Congrats on the identical boys! Hope baby B cooperates next time, the little sneak!

THAT IS FANTASTIC ABOUT THE BOYS!!!!! Words can not even express how truly happy i am for both of you! You two are going to make INCREDIBLE PARENTS. No doubt about it! You have both been such amazing friends to me & i miss you both dearly BUT i am glad that this time around everything is looking SO great!! Poor Trina and her blood vessels :( Love you both so much! 40,000 diapers on the way! Although it will only get you through about a week ;)

That is wonderful to hear about your boys...and a shy soul! I am so happy for you two! Okay, so were you picking out names? Thank you for the updates - what a wonderful peak into your parenting journey!

So happy for the both of you just one question and it might be dumb but her goes....how can baby a and baby c be identical??? wouldn't it be baby a and b or b and c I told you it was a dumb question....lol

congrats on having boys. Hopefully the zofran pump will help with all the nausea and vomiting.

Poor Trina has really been put through the wringer during this pregnancy. I hope the combo surgery/pump/bedrest give her a much needed break and some peace of mind.

Congrats on your beautiful boys!!!

Amazing! I can't imagine bed rest for the rest of the pregnancy will be easy, but hopefully Trina will start to feel better soon. Three boys?! That's nuts. My sis has three boys, but they're not triplets! (although they are pretty close in age) You most definitely will never be bored, that's for sure :-)

This is my first comment on your blog but I have been following ever since you started TTC. I am so happy for you both!! Congrats and I will pray that She can get some much needed relief from the vomiting. Look froward to watching her "grow"

Wow on the identical boys! Can't wait to hear if the other one makes it 3 or if you have a daughter in there. Hope the pump and bedrest help!

Yikes, puking is so not fun! Glad everything else is going well and yay for blue!!! Two more and you have a basketball team (I think, I am SO not the sports lesbian!)

Just catching up with you ladies--I'm so sorry Trina's nausea and vomiting has not yet abated! Poor thing. I'm glad she came through the cerclage okay.
WOW, three boys (or the possibility of three boys)!!! That is quite a brood.
Hope Trina feels better soon.