Trina has been hooked up to the Z0fran pump for a week and a half now. There were several kinks that had to be worked out in the beginning reguarding sites and dosage, but it seems to be working pretty well for her nausea. Unfortunately, she's woken up with killer headaches for several days in a row. She also has to change her site every 12 hours because Z0fran is very irritating to the tissue. Once it's pissed off that bit of skin, it won't work anymore. My poor wife has palm sized reaction sites up and down her thighs and now across her belly. She's running out of places to stick that thing. They said once she's felt good for a while, they'll start trying to wean her off of it.
At last weeks peri appointment, Trina mentioned to the Dr that she sometimes wakes up with menstrual type cramps. Doc said it's probably dehydration cramps due to her not drinking enough water during the night. Trina countered that she generally drinks 16oz or so overnight. Doc ended up giving her a Rx for Albuter0l to take as needed for cramps. Yesterday morning Trina woke up with intense cramps. They started at the bottom left of her abdomen and radiated around to her lower back. She drank a lot of water, laid on her left side and took a pill. They faded some but then came back. It scared us both. We ended up with an emergency peri appointment. They hooked Trina up to the contraction monitor. Even though she was still cramping a little, nothing registered on the monitor. Doc says she's sure they were contractions and wants her to take the pills every 6 hours instead of only when she has cramps.
Before we left, the nurse took us into the ultrasound room. She said she wanted us to have a peek at the babies to calm our nerves. It was such a sweet gesture. She didn't take measurements or have any other agenda. Just a chance to see our babies for peace of mind. They were so cute. Two of them were really interacting with each other and the third was napping. She pointed out all three heartbeats and let us watch them for a few minutes. 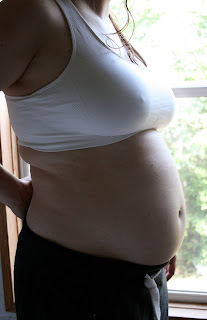 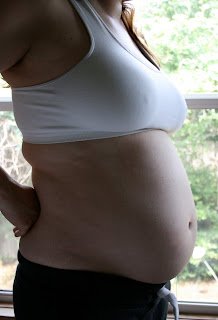 Tell the trips no more scares like that! *hugs* I hope that the nausea and the cramps calm down.

Trina is a trooper! No a rockstar. No a rockstar trooper!! All the stuff she is going through boggles my mind. As we say in the south, "bless her heart." :) I am so glad they gave you a reassuring u/s and that the babies are showing growth and progress.

so sorry things have been rollercoastery! Glad all is well, and yay for Trina's belly pic!

I've been following your blog for a while. I'm a triplet mom and also had severe nausea. From 6-20 weeks, I probably threw up 5 times a day and could barely hold anything down. Some days I was lucky to eat a piece of bread! After 20 weeks, it let up a little and I was able to eat more. I also started in with contractions at 17 weeks and preterm labor at 22 week. I ended up shocking my peri by making it to 35 weeks. I know things are scary right now, but just keep taking it day by day. Trina just needs to rest and take it easy as much as possible. Hang in there. You guys are doing everything right!

Wow! She is handling all of this so well - she is going to be a wonderful Momma! I have to say that you are doing a great job as well, being the support for her. You two are going to make an excellent team!

Yay for seeing the babies and thank you for the belly shots! :)

Oh you two, there's so much to worry about. Growing three babies is HARD work but you are doing great. I feel like you both should be treated to a 2 week vacation at a tropical luxury resort after they arrive!

Keep up the good work mommies.

you two are troopers indeed! i'm glad trina has had at least some relief from her nausea. go triplets!