At the peri appointment 2 weeks ago I told Trina I wanted the boys to weigh 3lbs a piece at the next check in. She scoffed at me and said that was too high a goal. I joking told her that if they didn't, she sucks. Then she gave me "the look". As of yesterday, the boys were measuring 3lbs3oz, 3lbs & 2lbs15oz. Now when Trina tells people that the boys weight 3lbs, I remind her that Baby C doesn't, because obviously she doesn't feed him enough. She swears it's because he's the most interactive with her so he must've "worked it off" kicking and rolling. Likely excuse. :)
The doctor told Trina she was doing a great job and to keep doing whatever she's doing. Her cervix is kind of short, but has been from 12 weeks and hasn't made any major drops since then. She also told Trina that she usually doesn't let triplet moms go much past 34 weeks. She said there's no need to torture the moms further after that point. 34 weeks is Sept 27. That means we're having our babies next month. Next month? How can that be? Where'd the time go? Still trying to wrap my head around that little fact...
After we left the doctor's office, Trina popped into the restroom for the 300th time that day. Forgetting how huge her belly was, she clipped it with the stall door and left a nasty scrape on the top right quadrant. Poor Baby C, first she starved him and now she's beating him.
Yesterday we went over to the hospital to tour the NICU. They showed us around NICU 3, which is where the smallest and sickest babies are. It was MUCH bigger than the NICU my friend's twins were at. I was a little overwhelmed by the machine noise and shear number of fragile little lives kept going by tubes and wires and lights. It was good to see, though, so I'm not blindsided when my boys join their ranks. They showed us 2 little boys that weighed 3lbs so we could get an idea of what our guys looked like. One was hooked up to a CPAP and had tubes and wires everywhere. The other had only a nasal cannula and less wires. Even though they weighed the same, it's amazing how much smaller the first boy looked to me. So frail. When we left, the nurse said it was nice to meet us, but that she hopes to never see us again. I felt the same way. Keep on baking boys.
29 Week Belly, 46.5", +42#
See the scrape? 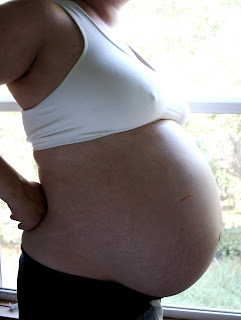 Baby A had the only "good" shot again. It's getting harder and harder to see these guys... 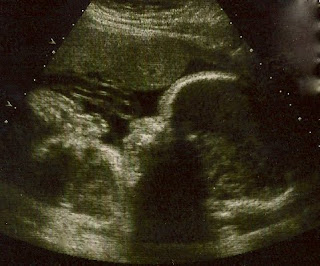 Wow, 29 weeks, that is awesome! And so fast! Amazing to think yall only have a five weeks left, at most.

You two are AMAZING! And Robbie, you have me cracking up over here. I wonder if Trina enjoys the same humor. ;) lol

So next month we will get to meet the boys. I'm so excited to hear this. They need to stay in until then - especially baby c - so they can keep growing!!

Maybe they could be 4lbs by next week?

Aw great news!!! Trina looks so good... you 2 are going to do great!! I can't wait to see pictures of these little guys when they make their arrival! The end is sooooo near for you guys you can practically smell it! :)

Congrats on 29 weeks! It sure is going by fast!

Amazing!!!! The photos are just gorgeous. I've enjoyed reading your blog. Best wishes to keep everyone staying put for 5 more weeks (and for your wife to be comfortable in the process)!!!

What a great update! So happy for you two.

Yay for 3 pounds...almost! Are you both comfortable going at 34 weeks? Or would your rather wait it out?

wow, trina looks amazing! the scrape made me laugh, i bumped my belly into stuff all of the time!

the profile shot is gorgeous :)

unfortunatly my career choice has made NICU my biggest fear of the possibility of a multiple birth. the idea of leaving any babies there just makes my heart sink. they should be with their moms right.. anyhow Trina is doing amazing! quit picking on her! j/k hope you're holding up ok, dont forget to take care of yourself too!

She is doing fantastic! You better be nice to her though! 3lbs at 29 weeks is effing AWESOME! Hope she can get another 6 or 7 weeks!!! Keep us updated.

Everything sounds like it's going great! I can't believe you're almost there. Only one month, wow...
Glad the humor is still in check also. :)
How much do you expect the boys to weight at 34 weeks?

We had that same tour and I remember thinking the SAME THING. The baby we saw was covered in hair :) He was soooo tiny. I was heart broken.

Keep on baking. and crackin your jokes :)

29 weeks is incredible and 3lbs each is fabulous! I’m with everyone else here you are both an inspiration… And I too love the humor… Keep up the great work and I can’t wait for the formal introductions… (But not for a few weeks alright boys)

abuse! beating and starving... LOL. Robbie you are always cracking me up. Not sure if Trina cracks up at this point. She looks so good and is doing so well, I am sure with the next it will be the same right? LOL... not sure if that would be on her mind or yours. Cannot wait till your boys come in 5 weeks! You two are amazing.

My wife and I have been quietly reading your blog for the last month or so, and we are so excited for your family! We've been inspired to start our own family blog at: breakingintoblossom.wordpress.com
Feel free to check it out!
Again, many congratulations! -J&R

Hi, I've been lurking for months and just wanted to leave you two a note to say that you rock! I linked here from a listing of lesbian ttc blogs when i was going through the process myself. I also ended up having IVF (after 11 iui disappointments) and my partner and i are expecting a singleton in march. it's been great to see your progress and i'm so happy for the two of you! best wishes and good luck!