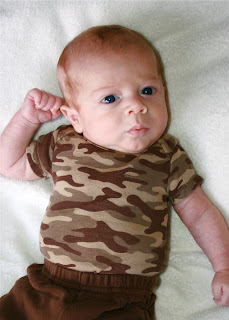 Linus had been doing very well since coming home from the hospital. He's been growing like a weed, starting to smile, pooping like a champ and acting like a "normal baby" in general. Then last week we started noticing the warning signs they told us to watch for when he was discharged. They were subtle and mostly revolved around his feeding. He slowed down on his eating, then began leaving more unfinished bottles than finished ones. As the days went by, his symptoms got worse and I got more worried. I kept thinking, thank god we begged for a cardiology appointment even when we believed we may be making mountains out of mole hills. He started choking more often due to rapid breathing while eating. Then 2 nights ago he looked distinctly grey after throwing a temper tantrum. Last night he started having retractions. All signs pointed to his congestive heart failure worsening. These were the exact signs that had him in his second catheter surgery. I've been trying very hard to tell myself that he'll be fine and that he probably just needs his meds tweaked. Sounds logical since he grew from 5lbs14oz to 8lbs8oz since his last dosing audit.
I took the day off of work to watch Simon and Dexter so Trina could take Linus to his appointment with Dr. HappyDance. I've been anxiously awaiting and equally dreading his findings. I just got the call from Trina a little while ago. Linus's echo looks worse than before and his xray showed that his lungs are wet. They're admitting him for observation while they increase his meds. Hopefully they can get his congestive heart failure back under control without sending him back into surgery...
Update: Just heard from Trina again. Apparently Dr HD said he was "very disappointed" with Linus's echo results. His aortic valve seems a little more narrow than after his last catheter and his mitral valve is leaking like a sieve. HD is going to talk to his team about different courses of action. These include higher medication doses, maybe another balloon catheter to stretch his aortic valve and possibly open heart surgery to repair the mitral valve. For the moment, Linus had an IV put in for general fluid and medication maintenance and an NG tube placed so he doesn't have to work so hard eating. I can't believe my baby isn't home anymore. :(
Posted by Robbie at 4:42 PM

My thoughts are with you and the little guy... I hope he's home with you soon.

Poor babe! I hope things start to look up and he won't need surgery. Will be thinking about you guys!

Poor little guy. I'm so sorry to hear this. We'll be thinking of you all and hoping he gets better.

Your Lil man and your family are in my thoughts and prayers!

So so so sorry to hear this news. Thinking of the five of you and hoping for the best.

I'm so sorry you find your way back down this road again. My prayers are with Linus. Sending out comforting hugs )))))))

So sorry to hear of the downturn. We will be thinking about you guys as you go through another rough patch. Please keep us updated!

I can't believe it. :( Keeping you guys in my thoughts and hoping that they can get the GHF under control with the least invasive methods possible. <3 <3

I'm so sorry to hear this news. I hope things improve again soon.

Thinking of you guys...

oh, i hope he gets better quickly, to return home.. thinking of you.

Oh god, I'm so sorry about this. Hoping Linus has a speedy recovery and is home where he belongs very soon.

I am so sorry to hear he is back in the hospital. I hope he is better soon and back home soon. Our thoughts are with you and your family.

Look at how much that little guy has grown since your last picture. He is ABSOLUTELY gorgeous.
Such a beautiful baby.
It sounds like he's in good hands and I'm hoping for the least invasive and fastest recovery option.
Thoughts and prayers for your sweet family.

Oh no! Poor sweet Linus, he has been through so much already. I will keep him and the rest of your family in my prayers!

Just read the update. Thinking of your sweet boy and all of you.

Sending you all our best vibes and hoping the best of the best for Linus! xoxo

You are a mom of triplets, Linus is sick and you are working. You are truly holding up the world. I am hoping linus gets better soon. All that weight and growth he has done has got be a good sign of his resilience.

Oh no! Sending many good vibes your way!

oh no.... It makes me so sad to read this. I will be thinking of your family & I'm sending lots of love to little Linus....

Really hope he gets to come home again soon!

You're all in my thoughts. xoxo

You're doing a great job, Robbie of being super mom. Linus' weight gain is a great sign. Hopefully he'll get back on track and be home soon. You're raising a fighter. :D

Thinking of you all and hoping things with strong Linus start improving quickly and he can come home fast.

saying prayers for you all

oh no! this post broke my heart. im so sorry your little linus is going through this. you are all in our thoughts. ((()))

Poor baby! I hope he gets better soon. He seems like a pretty resilient kid even at such a young age. I'll be holding him and your whole family in my thoughts and prayers.

I'm so sorry to read this! I was hoping that he was doing very well at home (which it seemed he was) and was going to get passed this without another surgery until he was bigger. Praying for his health and safety through whatever they choose to perform, and the surgeons skill and knowledge to get him through safely. :-(

Poor baby. I am so sorry you are having to to go through this. Sending healthy thought and prayers to you all!

I am so sorry for this terrible news. I hope that the treatment helps set things right: good thing his mommies are so on top of things!!

One of my little guys just had surgery (very minor) and I could not stop thinking about you guys. Seeing your little one in a serious situation would be harder than I can fully grasp. Sending Linus and his mommies lots of strength and healing!

I am hoping/praying for all the best for Linus and your family!

awwwww hope for the best!

I am so very sorry about this. We're sending our best out to the little guy, hoping he gets strong and heals so he can get back home to you all.

Thinking of you all and hoping that you get to be together again really soon!

So sorry to hear this. We are thinking of your family and hoping he gets better very soon!

thinking of you all. so scary and so not fair that he his back in the hospital and not home. hoping for a speedy recovery so you can have him home where he belongs.

We will keep Linus and the family in our thoughts and prayers! Hoping Santa brings you guys some good news soon!!!

ugh! so sorry you are going thru this. my heart aches for you! sending prayers of strength to Linus and your entire family.

Sorry to be so late in commenting but I want you to know I'm thinking of you all and wishing health and goodness for your tiny man. xo