Well, the boys' first Christmas didn't exactly go like I thought it would. I was picturing more joy and merriment and a little less worry and loneliness. My mom and I were at home with The Big Boys. We opened a few gifts sent by family next to a 2ft tabletop tree. Simon and Dexter slept through half of it. I made my regular Christmas fare in much smaller portions, but somehow it didn't taste quite right. Then I burnt the sweet potatoes and nearly cried. It certainly didn't feel like Christmas to me. Trina was at the hospital with WeeMan. She's been staying with him since Friday while I've been off work and able to watch his brothers full time. I hate that, once again, our family is split up.
Going back to work tomorrow is going to kill me. Holding and cuddling and caring for my sons is the only thing keeping me sane and grounded right now. Without them, I'm afraid I'll crumble. After work I'll drive to the hospital to see my wife, hold my little man and pick up breast milk for his brothers.
As for Linus, he's proving to be a troublesome patient. They've more than doubled his meds with no major improvement. His lungs are more clear, but his echo was still bad, he still breathes too rapidly, has retractions and is much too tired to eat a full bottle. He usually gets about half down before needing the rest put down his NG tube. He's blown or clotted 3 IV's now and is currently awaiting the Kangaroo Crew to come put in his 4th. He's scheduled for another echo on Tues. If it's very bad, he'll have his 4th heart catheter procedure on Wed. If they think he can wait a week, his regular surgeon will be back from holiday and will do it then. The hope is after they stretch his aortic valve, again, there will be less pressure in his left ventricle and his mitral valve won't leak as much. If the leakage is still in the "severe" range they'll be forced to do open heart surgery to repair it. This scares me half to death. I know open heart surgery is in his future, we're told it's unavoidable, but I'm just not ready. Will I ever be? I seriously doubt it... 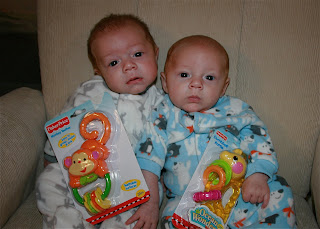 Poor Linus spent his Christmas on the cardiac floor of The Children's Hospital. At least he had his mommy with him. 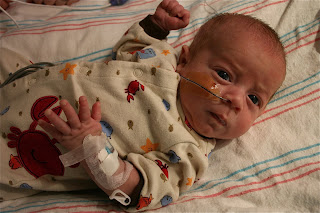 What a difficult Christmas indeed! I am sorry things are so hard right now and that your littlest fighter is facing such challenges. You guys are in my thoughts and prayers.

I'm so sorry this is how your family had to spend its first Christmas. Sending every good thought I have to all of you, especially to Linus. He is definitely a fighter that guy. He'll give his brothers a tough time, no doubt.

You have a most beautiful family. I feel so blessed to be a part of your world through your blog. I am sending positive, healthy thoughts your way and hoping for the best.
Stay strong and love those babies for even more than they are worth!

I love your boy's expressions!! SO expressive for little guys.

I'm sorry for the stress that you all are going through. Linus is quite the little fighter, isn't he??

i am so sorry your first christmas as a family of 5 wasn't merrier.

for whatever its worth, i am so impressed by your strength at this time - it sounds like you are doing an amazing job juggling your work, caring for your boys, and taking care of yourself and trina. hang in there mama, we are all thinking of you.

ps. i love that linus seems to always have his fist raised in photos - what a little fighter! :)

I'm so sorry that Christmas was so hard. I am cheering on little Linus each and every day.

I am sooooo sorry you have to go through this =( I can't imagine how difficult it must be for you all. Just know you have so many people praying for little Linus. I really hope he gets better and can come home very soon.

I am so sorry you had to spend Christmas at the hospital. I am getting all of you in my thoughts and prayers.

Robbie my heart absolutely breaks for you and Trina...I nearly cried reading this post. I don't have the right words to say to you right now...but know that you and Trina are great mothers to those 3 little men and it shows in every post you make. Hang in there :(

I am so sorry you are having such a hard time. It makes me cringe to think of any of my babies having such struggles, and my heart aches for you and your family. Best wishes always, and hoping this awful period is over soon, that Linus gets the care he needs and recovers quickly, never to deal with such issues again!

How heartbreaking to have the five of your separated for your first Christmas. I am so sorry Linus is back in the hospital and facing so many challenges. I think of you often and always wish for the best. Stay strong--you are doing an amazing job.

Hugs, Mama. Sending you calming thoughts. Those boys just get cuter and cuter. We're thinking of you, Trina and the boys.

I'm so sorry to hear you are split up again. Big prayers going out for Linus. I hope things get better and better.

I think about your family, daily. Christmas should be merrier, I hope that next year your family will be all together and healthy.

I am always in awe of your strength & how level headed you are though everything. I think that I'd be a basket case....

I'm so sorry to hear about Linus. Look at his face though! He seems like such a trooper. Hopefully this will be the only Christmas you all will spend apart. Much love to you guys.

Sending a HUG to you both! Hang in there momma's you are doing an amazing job.

I'm so sorry. I know you both are doing what you have to for your family, but, really, you're incredible.

Thinking of you all and praying for little Linus.

What an incredibly stressful Christmas. I'm so sorry things are so stressful for you. On a practical note, we found that we really like having a peripheral IV in the head. I know it sounds horrible and looks scary sometimes, but it is one of the easiest sticks and it has been our experience that they last longer and its easier to keep the kiddo away from it. We just put a hat on Charlie and he couldn't get to the line. The vascular team was always reluctant to suggest it because lots of parents have issues with how it looks, but we now request blood draws from the head as the first attempt. It generally goes much better for us. It may be different for you, but I wanted to say something just in case.

I agree that "head IV's" tend to stay in longer. All 3 of my boy's have had PIV's there. Dexter's hair is so thin they could just pop them right in. Unfortunately (or fortunately?) Simon and Linus have thicker hair so they'd have to cut their hair to see what they were doing. Simon has shaved spots behind each ear and a bit of his bangs where they had IV's. Nearly half of the right side of Linus's head and a bit behind his left ear is shaved from where he's had IV's. Poor guy has had them in every possible vein. Head, hands, arms, feet, umbilical, even a picc. He's a pro at blowing and clotting IV's.

Can I ask? Was Dexter Baby C? I have been reading your pregnancy story again. . .and Baby C was, in September, being very well behaved let people see him, and measure, Baby A "annoyed" the doctor on September 9th. . .it was Baby A who was the stinker. . .hmmmm:)

You and Trina and the dynamic duo and seems you are supported by a good support network and experienced doctors to get Linus up and running. Sending you the best vibes for a full brood together again!