Wednesday's doctor appointment was quick and uneventful. I asked the tech if we could get some take home pics since we didn't get any 2 weeks ago. She proceeded to snap the crappiest fuzziest pics ever. Three are face shots, and I use that term pretty loosely. One was a pretty good hand shot and the last was another gratuitous penis shot. Ah well, maybe next time we'll have the other tech. She's much nicer and always gets us good pictures. The boys are now weighing in at 1lbs6oz, 1lbs7oz and 1lbs7oz. I can't believe they're nearly a pound and a half a piece. That's so awesome!
As of about 5 minutes ago, I have officially felt all 3 of the boys kick. I feel baby C most often, which is funny because Trina feels him the least. I've felt Baby B on 2 separate occasions, but Baby A has been holding out on me...until now! :) Trina feels A & B most because when she lays down, whichever one is next to the bed kicks. When she monitors for contractions, the sensor sits either to the left or right of her bellybutton and whose ever side it's on kicks and kicks it. They're very interactive these days. The funniest thing is that we've started seeing a correlation between food Trina likes and Baby C's activity. Several times now Trina has said "Ooooh, cake" or "Mmmm, pizza!" and C has started kicking like mad. He's going to be our fat boy. :)
Before we started thinking of names or even knew genders, I asked Trina if we were going to name the actual babies in utero (Baby A is Bob, Baby B is Steve, etc), wait til they were born to figure out which of our chosen names fits each baby's personality best or just say "These are the names in birth order." I've known people with multiples who have done it each way. She said we should wait until they came out to "dub" them. I didn't really have a preference, so I agreed. Then other morning this conversation went down.
Trina: "Ooh, *L* is kicking hard!" :)
Me: -confused- "Who is *L*?"
Trina: "Uh, your son" -looking at me like I'm dumb-
Me: "I meant which one? I was under the impression you wanted to name them later"
Trina: "Well since Baby B is either *P* or *S* I figured Baby A should be *L* and Baby C should be *D*. Why? Did you want *L* to be a different one?"
I didn't really follow her "logic", but I don't have a reason to change the order. So there you have it. Our boys have names. Well, mostly. We have Baby A's first name set, Baby B is narrowed down to 2 possible names and Baby C is fully named. Depending on what Baby B's first name ends up, his and Baby A's middle names are already picked. Did anyone follow that? :) I keep hearing things like "It must be SO much easier to pick out 3 names, you don't have to narrow it down as much" This is a load of crap. We had Baby C's name picked out in a flash. If we only needed one name, that would be it and we'd be done. Coming up with 3 names simultaneously is hard. I feel a coin toss decision coming up pretty soon...
23 Week Belly, 44", +31lbs 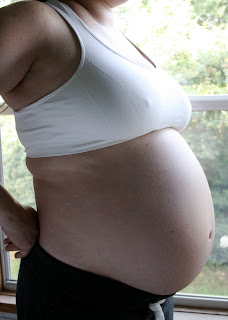 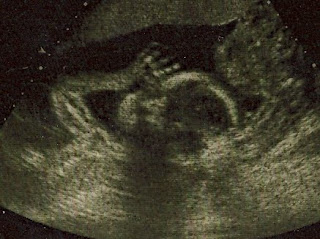 We have 2 boys and a girl. The girl's name were knew right away (named after my grandmother). The first boy (Baby A) was given our first boy name choice (my maiden name). With the other boy (Baby C) we just picked a name we liked and used a family middle name. :-)

LOL...the two of you crack me up. Is it strange that my highlight of every blog is to get an updated belly shot? I am so doing the belly shot thingy once we get a heart beat on our end.

I think you can sense their little personalities in utero. How active they are. How much they seem to move around etc.
I'm glad you are able to put their names to letters. (baby a,b,c)
When they come out you can always change it up and say, oh no..baby a is definitely S and b is for sure L.

Good luck getting a good ultrasound pic. we love seeing them.

That belly is looking goooood! I wonder just how big it is going to get with three in there!

ive always wanted to name twins, however why did you choose "c" to have a particular name? curious about that part.

We had such similar discussions on names but somehow along the way names just stuck on each one of them. Now it's fun to hear, "oh S is kicking now." I also agree that needing more names does not equal an easier time naming. It seems there is a somewhat easy name and tge rest get sweated out! It's also cute that Trina calls one of them "your" baby. Lol

and our u/s pics have been blah lately also. Why can't a high risk mommy get a little love?!

Can't wait to read what their full names will be! Funny how Trina gave you a dumb look lol Very happy that things are moving along well :)

loved this post, what a funny story about the names. i cant wait to hear what they will be!

and, i too love the belly pics!!

I love reading your updates! You girls crack me up! I can't wait to hear the names you have picked out

I love the ultrasound image!!!

I just happened upon your blog through thelesbianlifestyle.com. I am a lesbian mother of three, a seven-year-old-boy and four-year-old boy/girl twins. Congrats on the impending births of your little guys!