We had our second shower last Sunday and let me tell you, the gifts were bountiful. Once again everyone was so amazing to us and our growing family. We now have 2096 diapers! Doesn't that sound like a lifetime's worth??? Can you believe it's only about a 2 months supply for a set of triplets? Craziness. We have 3 bouncers, 3 boppys, 3 carseats, a highchair (and gift cards to cover the other 2), 2 diaper bags, a twin breast feeding pillow, pacifiers, bottles, a breast pump, bath stuff, the most awesome triple stoller that ever graced this earth, tons of clothes... The list goes on and on! We could literally bring 3 babies into this house today and be just fine for a while. That thought both comforts me and blows my mind.

Trina is somewhere between "feeling uncomfortable" and "in complete misery" 24/7 now. She has to stay horizontal for nearly every moment of the day. If she sits up for too long, she starts feeling light headed and her legs go numb. Doc says it's caused her super heavy uterus putting pressure on her inferior vena cava. Standing and walking cause terrible foot, back and leg pain, not to mention wears her out no time flat. The boys are taking up all of her organ room. She feels like she can't take full breaths. She gets winded just walking down the hall. If her bladder is even a little full, they kick it. She is also having trouble eating. After a few bites, she feels full or even nauseous. This week she's actually lost some weight. Eating is now a chore and she tries to make every bite count by monitoring it's nutritional value. To add insult to injury, her first stretch marks are sliding across the bottom of her belly. This realization brought a few tears to her eyes. She was apparently holding on to some crazy hope that she wouldn't get them...with triplets. Yeah...

At Wednesday's u/s appointment we were lucky to get our favorite tech who runs the bigger better u/s machine. We asked if she could try to get us some nice pics for our stash and she happily agreed...until the wand touched Trina's belly. Her look of confusion scared me a bit, but I tried to stay calm. She zoomed in and out and even stood up while looking at the screen. I couldn't discern heads or tales of what I was looking at on the monitor so I just kept watching her expression. She finally said she was pretty sure we were not going to get any good pics because the boys were a tangled mess. Apparently Baby A and Baby B are fighting for position. One of their heads is in position A, but the other one's body is in position A. She was having a very hard time deciding which body parts belonged to which baby and who was who in relation to the last u/s. Baby C was a little removed from the train wreck his brothers were causing, but he was also playing shy with the camera. Ah well, I'm sure this isn't the last time they're going to make picture day a nightmare. At the end of the appointment, they declared that Baby A is 1lbs15oz, Baby B is 1lbs11oz and Baby C is 1lbs12oz. I'm not overly convinced that A & B had precise measurements taken due to their wonky positioning, but on average, they're all doing great. I can't believe they're already almost 2lbs. My wife is baking strapping young men. 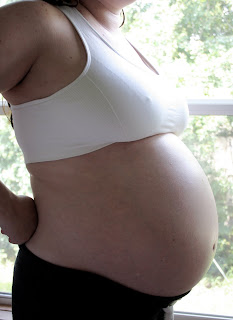 Yay for making it to 25 weeks! The end is so in sight! Sounds like those boys are taking mommy for quite the ride (I'm sure this wont be the first time either!!). I am amazing and in awe of how amazing she is doing. Making it to 25 weeks with trips one. huge. hurdle. Congrats to her. Now, the next 10 weeks (sounds like a lot i know!) are so important to keep those babies in there baking away. I'm sure that her body is being pushed to the max, but it's work is not over yet. You've got one strong mama on your hands. =)

at the daycare we have 2 strollers that fit 4 each. thats great you got a stroller for the 3 !

Yay for 25 weeks, and HURRAH for folks who love and take care of you - those boys will be so spoiled. :D

That's so exciting that they're almost two pounds a piece! Yay Trina. Stay strong girls. Congrats on the baby stuff. What a wonderful support system you have.

Congrats on the 25 week marker and the gazillion diapers! :) How wonderful that your family and friends are showering your family with love (and baby gear!) Just noticed that your ticker is now officially in double digits! How exciting!

Congrats to reaching 25 weeks and how wonderful to see their weights nearing 2 pounds each. It's so wonderful that everyone is stepping in and sharing the love... These little boys will have the most amazing start to life - surrounded by their wonderful extended family and their loving mamas.

That is great that you guys got a lot of stuff for the babies. Wow that's a lot of diapers....only a two month supply huh they can go through them really fast. Congrats on 25 weeks hopefully Trina wont be too uncomfortable.

I am starting to feel Trina's pain with my triplets..I'm just 20 weeks but the backpain is kicking in and so is the decreased appetite bc the babies are taking up all of the room in there! I love reading your posts Robbie!! Lets me know what I have to look forward to haha!!

Wow!!! I feel her pain... I'm reaching my 28th week with my surro triplets and I am in the worst misery of my life!!! I know exactly how she feels, especially with the eating. I have to force everything down and I am so miserable after every meal- it just wants to come back up!! Wish I could say it gets easier, but every day is a new challenge.

mine used to do the SAME thing! in fact, my baby B was actually in "A" position for most of my pregnancy, and like your boys, my C stayed out of the way for the most part.

more than one u/s tech told me my kids were going to drive her to drink. :D

Wow! She is doing fantastic. It gets really hard to decipher who is who the bigger they get. For a long time my baby A and B were laying head to head competing for the "baby A" position, neither of them completely down on my cervix luckily. Painfully enough baby b flipped between 28 and 32 weeks and was butt down then. Tell Trina she is a rock star and to hang in there and try to pack as many calories as she can in. Its more about the calories than the nutrition now... it will be the only time in her life that doctors will tell her to eat junk food haha!

They're being sneaky already! I'm glad things are falling into place and you're prepared!!

I just realized your ticker is under 100 days! Congrats to you both!

Way to go to Trina for doing so well and dealing with the uncomfortable or miserable moments as they come. She is going to be a great momma... and so are you! :)


I can't wait to meet these boys. I'm sure I'm not the only one. lol

I just found your blog from The Belly - holy moley, triplets! Congrats. And give Trina my best, poor thing!

Congrats on making it thus far!!! Poor Trina! Major bear hugs to her. Just keep in mind at the end of all of this you moms will have your 3 handsome baby boys!!!!! YAAAAAY!!!! Great gifts from the babyshower :)

That's awesome that you're getting so much stuff! I don't know how you would have afforded it all otherwise. SO FUN!