Thursday we went to L&D Testing for, well, testing. The first time we went there we had 3 very sweet nurses working on Trina and the boys. This time we had 1 not so friendly nurse. She wasn't mean per se, just not warm or talkative like the other ladies. After much "arguing" with Baby A, the nurse gave up on his NST. His super low position makes it nearly impossible to monitor him or even measure him on ultrasound. I hope he's not this difficult when he's out in the real world. :) Babies B & C both cooperated a little better and were given A+ on their heart rates and reactions and Trina's blood tests came back great. Along with her usual +1 urine protein, she also had some elevated leukocytes. I wondered if they'd put her on antibiotics "just in case" but they said it wouldn't be necessary. We left feeling very accomplished and with huge smiles on our faces.

Monday we went to the peri's office and saw one of our dr's associates. Our doc is out of town at a conference. Dr K was super nice and very warm. We liked him quite a bit right off. When he walked in the room he looked Trina over and asked "How many weeks along are you?" Trina said "34weeks today" with a grin. "And how many babies do you have in there?" "Three" bigger grin. "Well you must be doing something right, that's impressive" I thought it was very sweet of him to say. Then he started the ultrasound and got a sort of surprised look on his face. It scared me a bit until he said "These are NOT small babies!" in shocked sort of tone. I said "That's what we hear" huge grin. Once again Baby A made the doctor's job difficult, but with some poking, prodding and mumbling, he was measured. The boys are now estimated at 4lbs12oz, 5lbs1oz and 4lbs12oz and they are all head down! Looks like they heard about Friday's appointment and are preparing to come out the old fashioned way. As much as Trina would prefer it, that is just not going to happen. No way will our doc attempt a triplet vaginal delivery. And the best part of the appointment was pictures! Our first ones in forever!

Baby A, our difficult child. :) 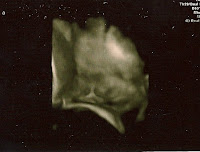 I love this picture of Baby B! 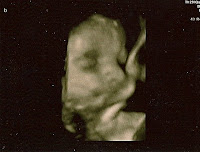 I came home tonight to find that Trina had been practicing her swaddling on Mr. Moose. 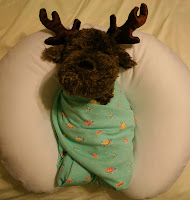 Oh my gosh, Robbie!! I cannot believe Trina has made it to 34 weeks with triplets!! I just looked up a statistic that said triplets are usually born by 32.2 weeks. Ummm ROCKSTAR! I, too, was like WTF? is that third picture. He's just too beautiful for a silly ultrasound picture. So excited for Friday for you!

The A and B pics are fabulous but C's picture is, well, um, yeah.

It must be wonderful to keep getting confirmation that your boys are doing so well and are so close size- wise. Trina has the uterus of steel! Seriously, almost 15 lbs of baby!?

I am constantly impressed when I read your updates. I am in awe of her strength! I can't wait to see what these (big) babies look like!!

How exciting! I love the pictures, and I love that Trina practiced swaddling with Mr. Moose. Just two more days!

I know you don't know us but we've been following your entire journey...TTC to now. I cannot tell you how many prayers we've said for your little guys and you too Trina. We are thinking about all of you.

My thoughts are with you 5 this week. All my love! You've both done such an incredible job and are amazing moms. Congratulations! 34 weeks is a lot to celebrate. xo

Yay Trina! She is a rock star! Her first pregnancy and its with triplets and she has made it this far with no complications! What luck! I love Mr. Moose! Just a few more days and they will be here... got my fingers crossed for 3 healthy big babies and a quick recovery for Trina.

34 weeks way to go. So excited for you both. Cant wait to hear the news on Friday. Thinking of you both.

SO CLOSE!! What a huge milestone-- you have both been amazing throughout this process. Can't wait for the next update!

Every time I see an update from your blog, I expect it to say the babies are here. I am in shock that she's made it so far, but it is amazing! Inspiring, even :)

Keep up the good work, ladies!!! We're all cheering you on!

WOW! very exciting week for you! i will be blog stalking and waiting to hear the good news and the names! if you dont have baby books we would love to send you 3! please email me and let me know if we can do that for you! alangley at triad dot rr dot com

I honestly have to bow down before you.....Trina is the BOMB.

I think I can see a baby in that last picture...but WOW...I'm really grasping.

I am just sitting here in amazement at your 34.2 weeks. SWEET

Damn you guys are amazing!!!! I cant believe you've made it this far, and look how healthy your boys are. that is so so so freaking cool! :) :) :)

Ummm and im captain obvious here, but youre going to be mamas in less than 2 days!!! Can you believe it!!

Just catching up on your blog and I have to say I snorted out loud reading this--too funny! Why do they even bother printing out the pictures where the baby looks like a melting wax blob?

seriously. 34 weeks is awesome. as for the babies, well it looks like B is going to be the performer in the family, huh?

Way to go!!!! 34 weeks is awesome - tell her I am going to call her the "moose whisperer" because he was swaddled so nicely and sleeping so peaceful! great fun! :)

Incredible! The boys look like they are ready to make their debut. And it looks like Trina is getting the swaddling down pat!

The pics of the boys are great, of course, but Mr Moose made me giggle out loud. Loved it!!
Congrats on 34 weeks, that is simply awesome. Even bigger Congrats that you will be mommies in 2 days!!!! There will be much blog stalking in the next few days!!