So Thurs we went back to the peri's office. Just for giggles we decided to go on the proper day. For the last several appointments they have been taking Trina straight back to an exam room so she can lay down before her u/s instead of waiting in the lobby in a chair. Usually they send us back and come in a little while later to take he blood pressure. Well Thurs right after she climbed up onto the table and rolled over (which is quite a lot of work for a woman in her "condition") the nurse took her BP. It was 130/90. Of course it was high, but that's the reading that was put into her chart even though it was not accurate. Trina was upset because we were told if the diastolic pressure was over 90, it was a problem.
Soon we were taken to the u/s room to get started. The doc had a hell of a time trying to visualize Baby A. He was curled in a ball and way down low. After getting his skull and femur measurments she told the tech she was moving on to Baby B because Baby A "was annoying her". Baby B was nearly in C position but cooperated a bit more. As always, Baby C was a breeze. We know Baby A's estimated weight is inaccurate due to only measuring 2 of the normal 5 body parts, but she had them listed as 4lbs1oz, 4lbs10oz & 4lbs5oz. The babies look great and are growing like champs! After that was determined, the doc asked how much weight Trina had gained because she had a lot of edema. The answer was 5lbs in 8 days, we were told anything over 3lbs a week was a problem. To top it all off, she still had +1 protein in her urine. I knew that 3 checks in the "bad news" column was probably going to have some repercussions. Sure enough, doc had us go straight over to the hospital for more tests. We were told if all was well, she wanted to see us back on Tues.
The nurses in the L&D Testing department were all really nice. They came in and took several vials of blood, did an Non Stress Test on the boys, did contraction monitoring, took Trina's blood pressure every 15 minutes and had her give another urine sample. About 2 hours later we had the results. Trina's kidney and liver functions were normal, her clotting time was perfect, her blood pressure was perfect, the boys heart rates were great, she only had 1 contraction and although she still tested +1 protein, her urine was clear of blood, infection, ketones and glucose. Once again, the nurses were shocked at how well Trina was holding up and once again we avoided being admitted. Looks like we'll be seeing our peri again on Tues. :)
32 Week Belly, 48", +50lbs 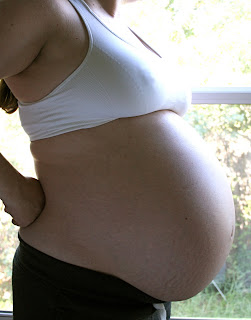 I am so amazing at how well she's doing. This is so great. My blood pressure would be high too if they took it right after I climbed onto a table..lol. You've gotta update more because when you don't I wonder if the boys are here. Post everyday or everyother day. Thank you. =)

She could honestly do this for a living. Pop out 3 babies here, 3 babies there. She's AMAZING !
Crossing my fingers for another week maybe week and 1/2.
If anyone can do it....it seems like Trina is the one.

Woohoo! Glad to hear it.

thats awesome... seems like shes got a great house inside!

Keeping fingers cross that all goes well on Tuesday. Congrats to Trina and the boys for making it thus far :)

you guys are doing so great! I cant believe your little ones are going to be here soon. I've been following your journey for what...3 years? Seeing you become mommies is probably the sweetest of all. :)

Trina is a rock star! And you are too for staying so calm with all of this. So happy the boys get to stay inside awhile longer.

I am seriously impressed with how long she is carrying these baby boys. Way to go! I love this blog. So full of hope and possiblility!

I'm so happy she is doing so well and the babies get to "cook" for a little while longer. :)

Its so wonderful to follow this journey and see how absolutely amazing its going. Trina is a pregnancy rock star! Best of luck with the rest of it!!!

You girls are cooking those babies great! I've been reading for awhile and just wanted to say, keep on keepin' on!