So Monday came and went without a doctor bothering to come tell us what the team had decided to do about Linus. Trina put in 2 calls to our cardiologist's office with no reply. Waiting for a decision to be made is always hard, but being left in the dark after a decision is made just pisses me off. Finally Tues morning DrHD came to tell us that it was unanimously decided that it was time for open heart surgery. Trina expressed how confused we were with what was going on. She asked why he had told her the procedure was a success and said it could be 6 months until the next step when here we were getting told 6 days later that it was time for that next big step. He explained that the catheter WAS a success in that the aortic valve had been opened more than it ever had. If that was the only thing that needed to be done for Linus, his test results would show significant improvement and his symptoms would have been rapidly vanishing. They were not. He said he had really believed that this procedure would have bought us a decent amount of time and that he accepted the fact that he was wrong. We appreciated his honesty.
Later that afternoon, Trina received a call from the surgeon's nurse. DrM would come to Linus's room at 8am Wed morning to talk to us about the surgery details and to give us a timeline. My mom drove in so I could make the meeting. DrM was very no nonsense and laid everything out on the table. There are several options on how to "fix" Linus's heart and he won't know exactly what can be done until he's "inside". He expressed some concerns and was very up front about the pros and cons of each procedure he spoke about. Even though he threw a lot of information and medical terminology at us, we kept up pretty well. Luckily I had done some research on different surgical procedures used to treat Linus's different defects. The one thing that threw us both for a loop was when he mentioned that Linus's pulmonary valve had been leaking on/off in a few of his latest echos. No one had mentioned this before. That makes 3 valves that are now having issues. That in itself isn't great news, but the fact that the pulmonary valve being in good shape is an integral part of our "best case scenario" surgical option makes us worry in a major way.
He told us that his surgical schedule was booked for over a month, but that Linus can't wait that long. His condition is only getting worse and apparently the "healthy parts" of his heart are buckling under the strain of compensating for the defective parts. He wants to work on him in the next 2-3 weeks. They don't want him to go back into crisis before they act. Having him "healthy" will greatly improve his chances to make it through the surgery and heal without as many complications. They're going to look at the schedule, decide who to bump and call us back with a date and time. We told him we wanted to take Linus home while we wait for surgery. DrM told us that that wasn't how things were normally done, but he would allow it. We left the hospital that day. We have to go back in for a cardiology check up on Tues just to make sure he's doing ok and to see how his 4 new meds are treating him. I sure do hope that after his surgery, this kid's medicine cabinet gets a little smaller. He takes a ridiculous amount of medication each day. 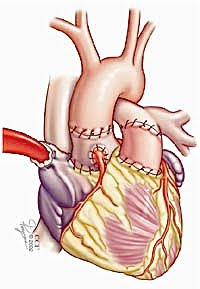 This part will probably bore most of you, so feel free to skip it. I just want to have the technical stuff down for posterity. Basically Linus has two major problems that need to be fixed in order for him to start thriving. The first issue is that his aortic valve is a mess. He doesn't have the three requisite leaflets and both the aortic annulus (fibrous ring that houses the valve) and the valve itself are too small. Secondly his mitral valve is not formed properly and has become scarred and inefficient due to high ventricular pressures caused by his aortic defect. These two problems are now causing other problems. It's like a cardiac failure snowball. Since the mitral valve isn't doing it's job, his left atrium is enlarged. The high pressure in his left ventricle is also causing the heart wall there to become thickened so that it can not relax properly. This only magnifies the high pressure and makes all the other issues worse. DrM believes the best option for Linus is to repair the mitral valve, do an aortic annulus expansion and to perform the Ross Procedure (pictured in the diagram above). This would hopefully give Linus 7-10 years before he needs another open heart surgery. DrM said he would go to "extreme measures" to repair the mitral valve so that it did not have to be replaced. Not having a mechanical valve put in would save him from a lifetime of dangerous blood thinners. Expanding the tight aortic ring would allow a larger valve to be put there making it easier for blood to leave the heart properly. The Ross procedure is where the aortic valve is removed and replaced with the patients own pulmonary valve, the pulmonary valve is then replaced with a cadaver valve. The pulmonary valve will generally continue to grow in it's new spot giving the patient many more years before it has to be replaced again. Using a cadaver valve in the pulmonary position also keeps the patient from having to get a mechanical valve requiring blood thinners. This is where the importance of a good pulmonary valve comes in. If his is not in tip top shape, it can't be moved into the much more demanding position of aortic valve. We are hoping beyond hope that the leaking is a physiological issue caused by his aortic stenosis and not a physical problem with the valve itself. We won't know until DrM actually looks at the valve "in person" instead of onscreen. If it's not a good valve, a mechanical aortic valve will be used. This is not a good option, not only because of the blood thinners, but also because he will outgrow it fairly quickly and will need it replaced in a few years. I really hope that DrM's 3 prong surgical plan will come to fruition without a hitch. Linus has had enough complications, it's time something goes his way for once.
We can add the hospital's mobile to the growing list of items that have Linus's affection. The socks on his hands are to keep him from pulling out his NG tube...again... 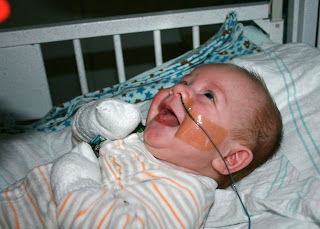 Only a tiny bruise left from where they went in through his carotid artery. Look at that double chin. My little fatty fatty bumbalatty. 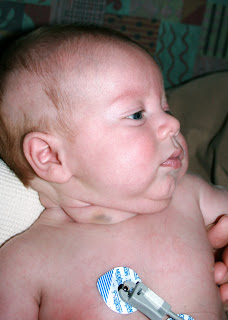 I wonder how long we'll have the same color eyes. :) 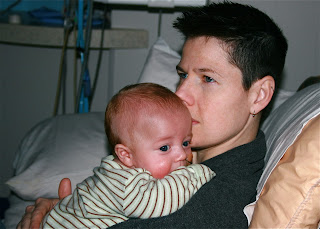 He is absolutely adorable and I am sending you all the very best wishes and hopes...........

Look at those chins! He's so freaking cute. I hope surgery happens quickly, and that everything goes as smoothly as possible.

I'm so sorry that this was not the news you were hoping for. You and your family are in our thoughts and prayers. Here's hoping for a safe and effective surgery, a speedy recovery, and years to heal and grow before anymore procedures.

Wishing you luck with the date-finding and the actual operation and everything that is to follow. Hope that the brothers are growing as well as your little fighter.

I am continually amazed by you and your wife's strength. I am keeping my fingers crossed that Linus will be home for good with the rest of the clan soon. You all are in my thoughts. ♥

I am crying in my chair right now. He is so perfect and beautiful and I too think its beautiful how much strength you and trina have. Praying the dr gets a slot soon. Our thoughts are with you, trina and the boys.

You guys are amazing... I am blown away by your strength. May a date come soon, and may this be the beginning of a quick recovery.

He is so beautiful.

I want to eat up those chins.
He is darling.
I am so sorry that surgery has become such a sudden reality for you.
I pray that when he goes in everything goes as well as can be hoped and better.

I wish I lived closer to help.
Will you have someone to come and help through the surgery and recovery ?

Linus looks so good and content. I hope you get some good news soon. You are a truly an amazing family and heroic parents.

Awww that last picture of you both is fabulous! He looks so happy. I appreciate you putting the medical jargon in there. It's nice to be able to understand from mommy perspective and nurse perspective. Good luck mama. You're doing a great job.

I am so impressed with your strength, composure... I am hoping that this surgery is the answer and solution to make this little man a stronger and healthier baby to enjoy life at home and leave hospitals for awhile. Your family is amazing and you are in my thoughts.

he is so cute. poor baby--can't imagine how it is for your family, but i am in awe of you guys. thinking of you!

You two are damn cute together! He's seems like such a happy little guy despite all the medical issues he has to endure.

I've got really high hopes that his valve looks perfect when the doc gets in there to move it. Linus deserves a few years break time from surgeries after all he's been through.

I know they aren't her genes but the pic of him looking at the mobile looks a lot like the pics o have seen of Trina. Random?

thinking of you all. hope this all goes well--he does deserve something going his way! what a cutie he is.

Thinking of you guys. Em had her surgery before she was placed with me through the foster care system. I can't imagine how difficult this is. He is so beautiful!