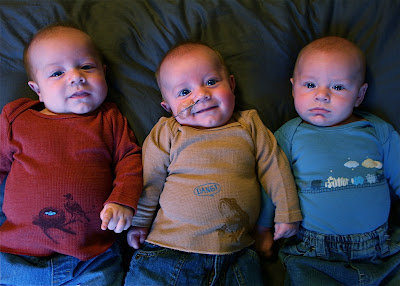 Wow, I can't believe my boys are already 4 months old. How is this possible? Where has the time gone? The one "good" thing that came of Linus and Trina staying in the hospital for 8 days this month was that Simon, Dexter & I had 5 solid days together. Being able to have them all to myself 24/7 was an amazing bonding experience. I seriously loved every minute of it. I daydreamed daily about being independently wealthy so that both Trina and I could stay home and raise our boys. Obviously it would have been much better if the 5 of us had been together, but as far as silver linings go, it was a pretty good one. Those three boys are my world. I love my family.

Simon is approximately 16lbs which means he's skyrocketed to the 66th percentile for his age. He's rolled from his front to his back several times and can push up with his arms during tummy time like a champ. He can also pull his knees up underneath him while laying on his stomach. When he figures out how to do both at the same time, crawling won't be too far behind. I'm really hoping that's still a long while off. I'm so not ready for them to be mobile yet. He's taken to licking and sucking on his hands all the time. If you hand him a toy he can almost always get it into his mouth. His favorite toy is a ball that is big, but very light and easy to grasp. He tries to put it in his mouth, but it's nearly half the size of his head and therefore does not fit. This frustrates him to no end, but man oh man is it funny to watch. He's still our most passionate son. He gets ridiculously worked up when he's tired or hungry. Anyone that knows me knows the poor boy comes by this honestly. He acts completely mortified and dejected when we put them down after their 7PM feeding. I swear you'd think we placed him in a cold dank cellar the way he carries on. On the flip side, Simon is still our smiliest child. He smiles easily and often and with his whole face. His eyes sparkle with every grin. This kid laughs so loudly, it's hard to believe he's just a baby. When he's lit up like that, you completely forget how crazy he can get. If he stays half as charming as he is right now, we're in big trouble.
Linus is tipping the scales at around 13lbs which means he is officially on the growth chart for his age. This boy is already at the 12th percentile and I couldn't be more proud. I am constantly amazed at how much his and Simon's mannerisms are alike. His cry, although a little raspy and much quieter due to his damaged vocal cords, has the same rhythm and meter as his big brother's. This week he laughed for the first time and again, it sounded eerily familiar. Since he is a few weeks behind developmentally, it's been a hoot to watch Simon grow out of certain sounds and behaviors only to see them "resurface" in Linus. I can totally see why identical twins that are separated at birth end up living such similar lives. On the other hand, Linus is definitely more even keeled than his brother. His highs are a little less high and his lows a little less low. He's now smiling and interacting more with us than with inanimate objects. Take that food bag, who's the champ now?? Although his head control is getting much better, tummy time still consists of him laying on his belly with his face on the mat. I'm sure his strength and stamina will greatly improve after his surgery, which is scheduled for Feb 22, by the way. At this point it takes all he's got just to eat an ounce of food by mouth. By the time he's done the hair at his temples and neck are moist with sweat. As much as I love his newly acquired laughter, I also love his pout. He's mastered the skill of a sad slow cry. He'll wrinkle his brow, then the lip comes out and the eyes water, then comes the whimper. Heartbreaking, I tell you. If we're not careful, he'll get away with murder using that face.
Dexter is also around 16lbs and in the 66th percentile. He still studies things intently and can entertain himself for much longer than the other two. His Aunt Andrea gave him a toy puppy that he absolutely loves. He'll just hold it or snuggle it up to his cheek or chew on it. I just love watching him with that thing. He still hates bath time even though we've still never tried to drown him. One day he'll like it, right? Several times when Trina or I have gone in to check on Simon while he throws his "screaming bloody murder" fits at bedtime, we'll look over and Dexter will be wide awake, quietly listening to Simon holler. When we make eye contact he flashes us a killer smile. It's SO hard not to snatch him out of bed and play with him since he's being so well behaved and precious. I can't believe our little firecracker has mellowed into this soft spoken dream of a child. When he "talks" to you or just to try out his voice, he's so quiet and calm about it. He has the cutest little smile that's just a bit crooked and accented by a deep dimple. You'll have to take my word for it since anytime he's being extra cute and I pick up the camera, he goes blank. Just look back at any picture of him, he always looks vacant or pissed. It's like the damn thing steals his soul. One of these days I'll capture that lopsided smile and show it to the world.
Posted by Robbie at 10:28 PM

Happy four months boys! I don't know if it's even possible, but they just get cuter and cuter.

I love it! Time is flying, I can't believe it. Happy four months, boys!

aww they are growing up so fast!

These boys steal my heart everytime I see a picture of them! Thank you for an update - they are all growing so fast!

They look great big and I can't remember where the other 3 months went so how did 4 months come.
Such happy little smiles. Even if you didn't catch his lopsided smile :)

love! they all look fantastic! so sweet. you're really making me miss those days. :)

So very cute. Happy 4 months!!
Little J hated the bath until we figured out that what he hated was the little hammock thingy that goes in the bathtub for the newborns. He just wanted to sit.in.the.water. As soon as we took out the hammock and plunked his bottom in the water he was happy as anything and even now will spend up to 45 minutes in the bath.

They're so adorable! Happy 4 months!

Hurray to you all and keep on rocking! From our side, we're checking in as often as possible and will definitely be crossing fingers on the 22nd.

Happy four months. They are growing up so fast. They are so cute.

Just loads of love to the whole family.

I absolutely LOVE how you write about your boys...you're such an awesome mom!

I love this update and the picture of your three boys is FANTASTIC!

Wow, what a great update! They are just the most beautiful little boys... Congrats.

Oh my gosh! They look like little chunks! They are so cute!

How has it been 4 months already? (I'll probably say this every month!) Happy 4 months boys!! They're filling out so well. I can't believe the milestones they're starting to hit already.

Your boys are so cute. My wife and I love your blog.

LOVE your blog. They are just gorgeous. Our baby Eve was diagnosed with her heart defects at 48 hours old. She had two surgeries at 4 months...main issue was her mitral valve, which they were able to repair (vs replace!) We too are hopeful that we are many years away from another surgery. Let me know if you ever want to connect. I post at Facebook.com/1in100...and try to get on BabyCenter's heart board as much as I can. Annamarie 612.964.6728, annamarie@1in100.org

Your boys are adorable and you are two great moms! I'm hoping that Linus' surgery goes really well!

hey i'm new to this blog, but just wanted to say 1. TRIPLETS! wow! i have virtual twins, a bio and adopted daughter one week apart, and i think i've got double the work load! your boysies are adorable, i have three older boys myself (plus my virtual twin girls). 2. i'm a fellow heart mommy, so will follow linus's story with added interest. ;) 3. most of all, i really enjoy / like your writing style! keep it up and i can't wait to get caught up with you and your fam. ;) allie b. ;)where do you guys live? stateside or elsewhere? ;)

Every parent has to deal with it! It is sad and beautiful how quickly they grow :)

Good luck tomorrow! We are thinking of you guys and Linus.