Tues morning I woke up early to feed the babies so their mommy could sleep. She had a very rough night with Linus who has taken to projectile vomiting several times a day and night. Apparently the less oxygenated blood his digestive tract gets, the worse his reflux will become. We've had to take his feedings from 240ml/hr all the way down to 80ml/hr. This means we get a lot less sleep and he has to be hooked up to the pump for much more of his day. So there it was, bright and early on the morning my boy was supposed to have his heart surgery and instead we've battled vomit all night long and are starting the day just like any other. I was in a pretty foul mood to say the least.
I measured out all of their various medications and put the bottles in the warmer. I went over to Linus who was sleeping in the swing as he tends to do on "bad nights." I was planning on just putting his meds through the NG tube, then starting his feed while he slept. I figured he could use the extra sleep like his mom. Well, apparently I was too noisy because he woke up. I expected to have an overly tired, cranky baby on my hands, but I couldn't have been more wrong. He makes eye contact and shoots me the biggest, brightest smile he has and then laughs! I couldn't believe it. Linus can be a hard crowd when it comes to laughing and here he was giggling unsolicited. What a ham. I changed him and we chatted for a bit before the other boys started stirring. He is such a happy, joyful little guy. It really made me think. Here's a kid in heart failure that's been up puking his guts out all night and he can still keep a sunny disposition. I'm pretty sure I could learn a thing or two from him.
These boys are such amazing little creatures. I swear they smile and giggle and chatter twice as much as they're grumpy or sad. Everything seems to make them smile.
Sitting in the glider with Mimi makes Simon & Dexter smile. 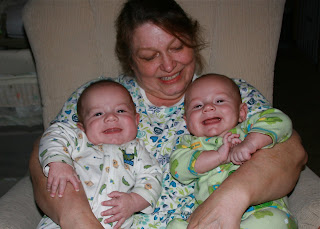 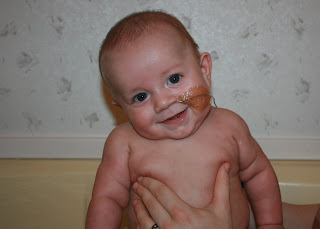 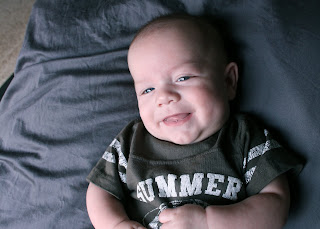 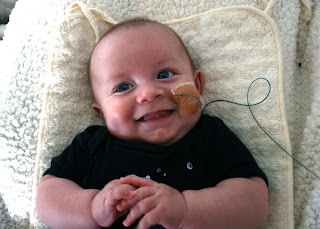 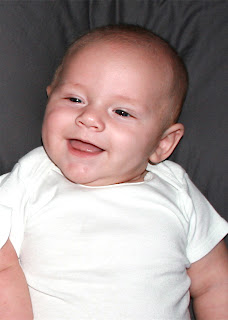 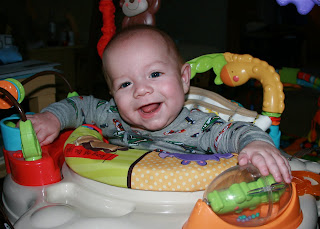 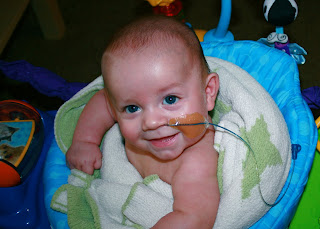 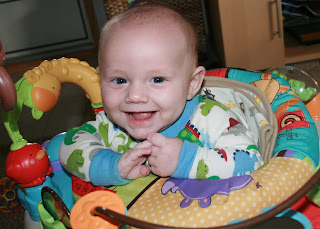 Those are 3 of the most handsome boys I have ever seen! Linus though, I don't know, something about him just pulls me in! I wanna squeeze him.

my heart is smiling! that is so damn sweet.

Thank you for making my night. My goodness they are just so freakin cute!!

What a sweet sweet boy ! Wait. Make that 3 sweets and plural boyzzz.
They are so sweet and I can't remember and find it hard to tell who are the identical. Linus and Simon ? right ?
They look so much alike.

Thank you for the lesson Linus...I needed it tonight.

Yes, Simon & Linus are the identicals. :)

They are so so so cute, and so smiley, I can't get over it!

Thank you for sharing. They are pure joy, and have the best smiles. Leslie

I didn't think it was possible, but they just keep getting cuter! Much better to see them all smiling than crying :-)

They are fabulous. The kids show Kai Lan always says "That make my heart super happy" and it came to mind with all those adorable pictures. :-)

they are looking less and less like newborns every day!

All those smiles! Your boys are absolutely irresistible.

Looking at all these smiles, just makes me smile!!! They have such beautiful smiles and are the happiest babies! It's amazing how a little of their 'sunshine' can make everything wonderful!!

You have the most beautiful boys on the planet - and they're only getting more beautiful as they grow too! Still keeping my fingers crossed so you'll have them without any more doctor's appointments and medicine and stuff - sending you plenty good night wishes too!

I have been reading your blog since before the boys were born. Your little guys have pulled me right in and melted my heart. I find myself thinking about your little family at random times even though we have never met...funny how that happens huh? I send warm thoughts and many prayers from Michigan.