It was so nice having all three boys home for Christmas. We opened our gifts the night before so we could get on the road the Christmas morning without having to rush through things. The boys had so much fun ripping the paper and playing with new things. The next morning we all piled into the van for their first road trip. Simon slept the whole 2 1/2 hours while Dexter and Linus only took a 45 minute nap. I was worried they'd be Grumpy Guses, but they did great. After a few hours of food, fun and family time, we piled back in the van. This time Dexter & Linus slept the whole way and Simon stayed up. He decided he'd had quite enough of his car seat when we were about an hour from the house. Poor guy was crying and signing "all done" over and over. I felt so bad for him. All in all, the boys did amazing for their first trip & Christmas was a hit all around. 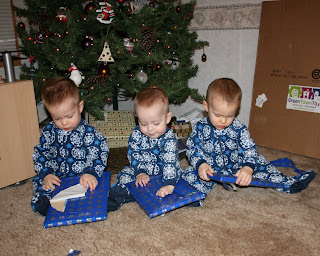 Ripping into the first gifts of the night. 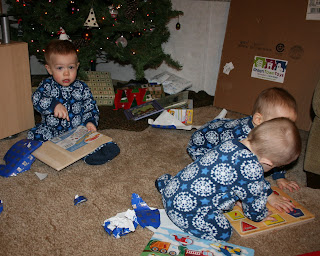 I love Simon's face in this picture. He's like "Do you see this???" 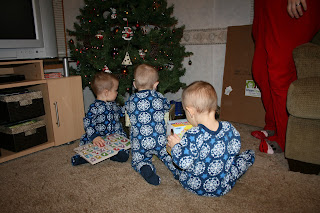 Going back for more. 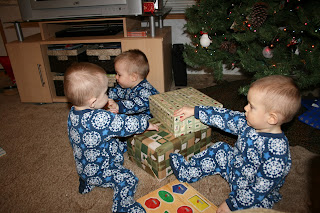 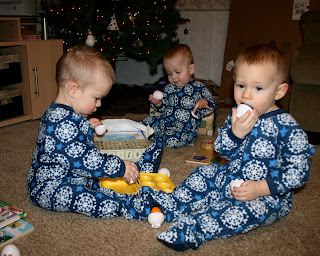 Once these squeaky chicken eggs were opened, the boys were no longer interested in opening any more gifts. 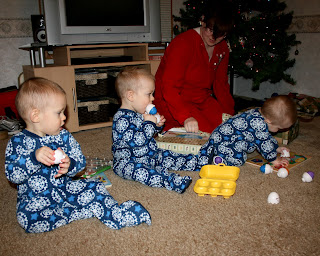 Trina: Hey boys, look at this awesome present.
Dexter: Have you seen these eggs?
Simon: -nom nom nom-
Linus: This puzzle would be so much more fun with an egg on it. There, perfect. 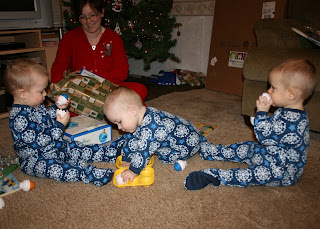 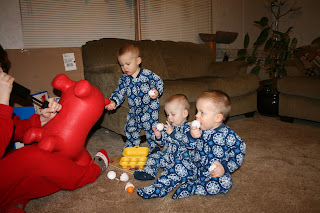 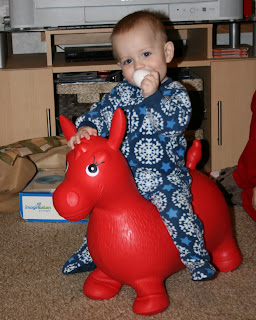 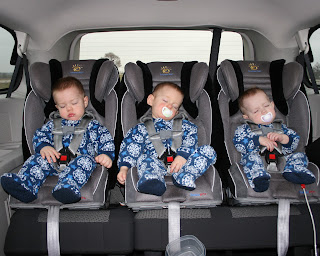 Sleeping on the way to Papa & Grandma Liz's house. 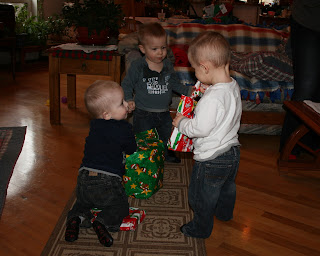 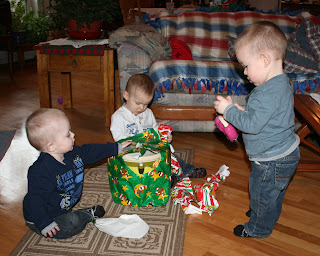 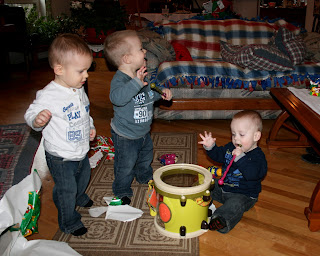 Simon was SO excited. 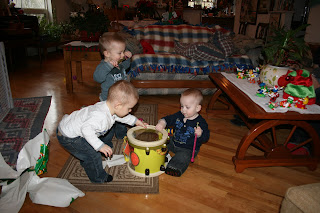 Simon & Linus were content with chewing on the drumsticks, but Dexter had something else in mind. 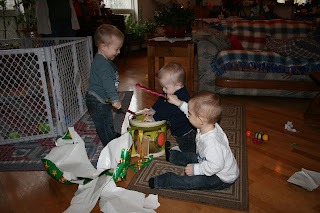 Poor Linus kept getting his hands smacked. Not sure why he continued to put his hands back up there...
Posted by Robbie at 1:01 AM

Your boys are such a funny team of mischief! I must know How to get hold of those squeaky eggs! Glad you had a great Christmas and a good car trip too!

Love love these boys. So glad everyone was home for the holidays! Hugs, Tam & Danielle

Triple LOVE the pic of them all asleep in the car seats! What precious little boys!

Gah! Your boys are just so cute.

I think they may still be thinking "where'd our eggs go" in the pictures at second Christmas!

So happy to visit and find new updates! Looks like your holiday was awesome and they are getting so big!