I am not dead, nor being held hostage in a wifi-free zone, nor computerless, nor have I turned Amish and forsaken my electric ways, I am just a combination of tired, busy, lazy and busy. Did I mention busy?

The boys are 14 3/4 months old now. I can scarcely believe it. I'm not going to recount everything that has happened in my 5 month hiatus, but I'll give you a quick run down. Simon & Dexter are running ALL over the place ALL the time. They are starting to climb, successfully, onto things that they can then fall off of and cause themselves a great deal of bodily injury. Speaking of injuries, Linus injured his shoulder a few months back. it's healed now, but still pops. Also Dexter bashed his face and ended up with stitches in his lip. Simon is the only one who hasn't made an ER run. I always expected him to keep us in the ER since he's fearless and athletically geared. Shows what I know... Linus started crawling about 2 weeks after his birthday. It was slow going at first, but now he's a champ at it. He still hasn't pulled up to standing, but I think it will be fairly soon. He can stand up for about 2 minutes if you prop him against something sturdy. Simon & Dex can say several words and are very good at signing. Linus doesn't really talk, but has coupled sounds with a few signs. He says "baaaaay" when he signs baby, "ahhh" when he signs hat, etc. It seems these boys learn something new every single day. Their personalities are really blossoming. I love how they play and interact with each other. When Linus is fussy, Simon will pat his head and say "baaaby" really sweetly. It only makes Linus madder, but boy is it cute. :) When Dexter takes a toy from Simon he throws himself to the floor in a flump and cries like someone dear to him has died. Tonight Simon and Dexter were hugging and kissing each other and laughing about it. No matter if they're laughing or crying, hugging or fighting, these boys are the best of friends. I hope they always remember to stick together, thick or thin. 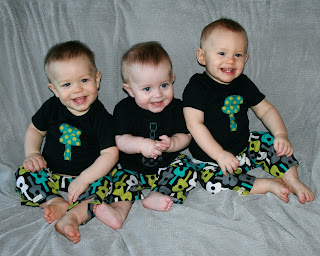 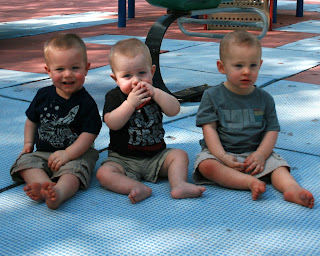 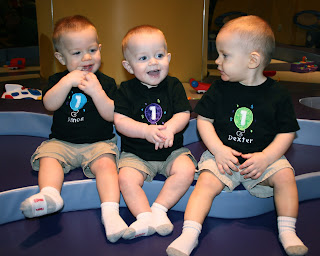 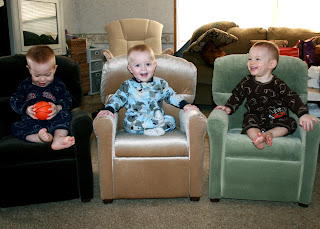 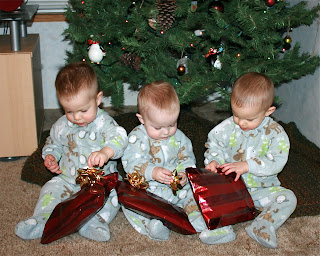 Playing with their stuffed fruit. 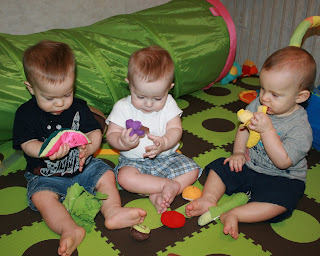 Who needs toys when you have boxes and Tupperware? 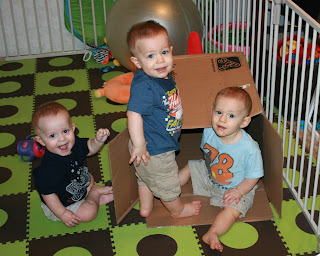 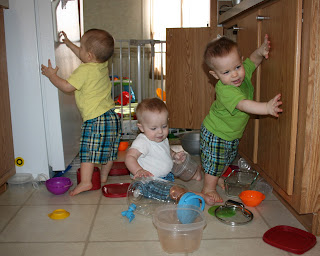 Our first 2 family photos.
Can you believe it took so long to get all 5 of us in one picture frame? 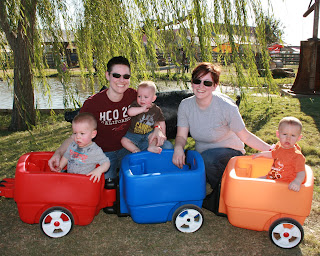 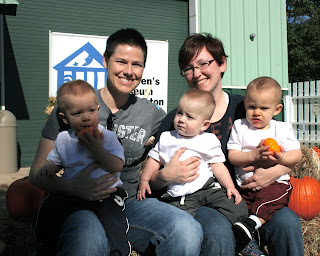 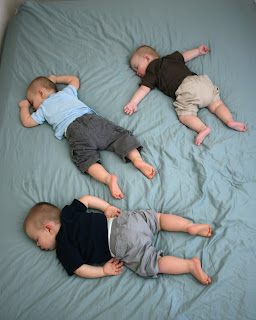 Enjoying some of their birthday presents. 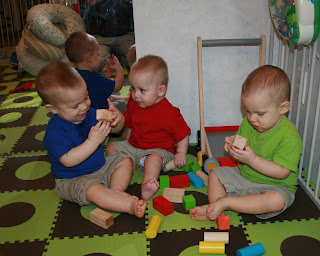 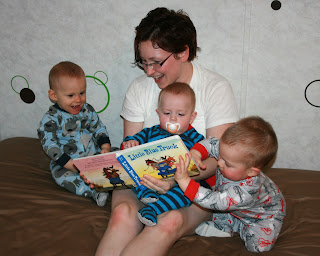 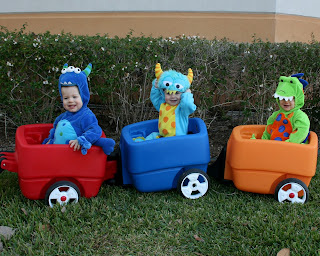 Nothin better than baby butts!
You can really see how "wee" our WeeMan is compared to his beefy brothers. 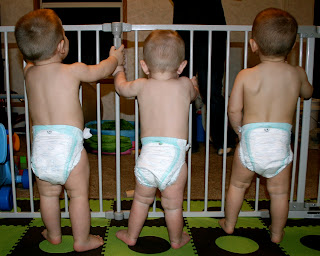 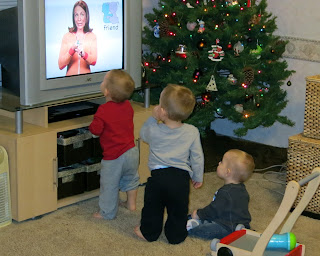 They were all fighting to sit on my lap when I got home from work.
These boys make me SO happy. 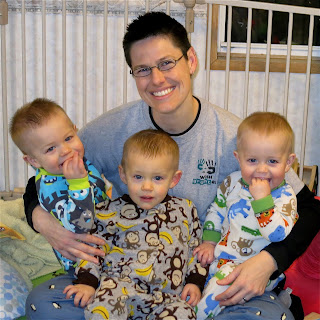 Glad you're back, I was wondering what happened to you! :)
The boys are so cute, I can't believe how BIG they are now!

Thanks so much for the update, we've been thinking about you guys. You all look so wonderful!

Yay. I'm glad you're back.
I can only imagine how busy you guys are with active little ones.
They are getting so big. and wee man isn't nearly as tiny as I thought he'd be. He's catching up.
Hope you guys have a great Holiday Season.

It made me teary seeing all those wonderful photos of all of you together, beautiful!

Ah they are so cute! I love the one of them sleeping on the bed. All of their arms are in different positions. Great family shots!

First time visitor! I loved going back over older posts and seeing how lovingly these little boys are cared for, such a refreshing blog when blog surfing! Look forward to reading more!

The boys are so adorable! I read through your blog over the last few months and I really appreciate your honesty throughout this process. Glad to hear that the boys are doing well! Merry Christmas!

Thanks for the update! You have a very, very beautiful family!!

I have to say, I love how in the sleeping picture, each of the boys has their arms in a different position. :D

So wonderful to read a post from you!! The boys look AMAZING and it sounds like everyone is doing so, so well. Your family shots are great and I love, love, love those little train/wagon cars that you guys can haul them around in. SO CUTE! Wishing you all a very Merry Christmas...what a difference a year makes! Enjoy this Christmas with all 5 of you happy and healthy at home!

Your family is so, SO beautiful!!! Merry Christmas to the five of you! :)

Happy to hear that all is well. The boys are so big and look SO happy!
Yay for updates!!

Your boys are so cute!! I mean their momos are beautiful too :) but still ...
Thanks for the update!
Merry christmas to the five of you!

Glad to have you back :)

Oh my gosh! How they have grown! It's been awhile since I've checked in, but wow! They are adorable. So glad to see they are all so smart and growing well. :D

Worth the wait. They are SO.UNBELIEVABLY.CUTE. Those faces! Loved the photos of the 5 of you, too. xo!

It is so great to see three babies the same age as my little one!! Mine is a little over 14 months! Thanks for sharing these photos!

so glad to see the boys (and the mamas) doing well! :) Happy holidays to you :D

welcome back. the boys are ridiculously cute. i can see why you're busy.

so glad they're doing well!

Love this pics!! Thanks for the update. The boys are so darn cute. Glad everything is going well.