Well it's Day 7 of my injections and boy can I tell. A headache set up shop late on Monday and it's still with me. Tues morning I was thoroughly miserable. I woke up with my head pounding and my stomach doing flips. I spent all morning dry heaving and trying to stay away from light and sound. I asked Trina if she was SURE she wanted to be pregnant, because if it was anywhere near as bad as my injection side effects then it SUCKS. By Wed my lower abdomen starting feeling funny and today it hurts. Emotionally I'm not as bad of a wreck as I thought I would be, but that's not to say that I feel normal either. I definitely have a much shorter fuse and I've nearly cried over nothing several times. It's kind of like bad PMS without the food cravings. As I'm being pumped full of egg-growing meds, Trina is taking womb-cushioning drugs. The same day I started injections, she started taking estrogen tablets 3x a day and switching out an estrogen patch every 3 days. She's not quite as moody as I am and luckily isn't having any of my physical side effects, but neither of us are a walk in the park to be around. 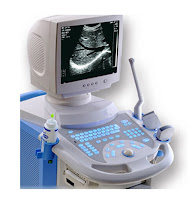 Getting wanded every other day is not my idea of a good time and my left ovary isn't making it any easier on me. While getting my initial exam to see if I could provide the eggs for this IVF cycle, the nurse could not find my left ovary. I was mild-moderately concerned, but she said it was not a big deal and rescheduled me for a time when the doctor would be available to wand me. I went back for a 2nd, then a 3rd pre-IVF wanding and he finally found it by simultaneously wanding me and pushing on my abdomen. It was in a funny position so he couldn't see much more than the outline, but it was there. Whew, problem solved, or so I thought... At my baseline exam, lefty was MIA again. Once again I was told it was no big deal and that when it was stimulated, it would move into position. Monday, lefty was no where to be found...again. Try as she might (ouch) the nurse couldn't even get a glimpse of it. Wed lefty was still hiding. After a few minutes of fishing, Doc says "maybe you don't have a left ovary..." I reminded him that he'd seen it before and he proceeds to tell me that sometimes "other things" can be mistaken for an unstimulated ovary and that if I had one it would be front and center after 5 days of stims. Just as a cold panic was washing over me, he found it. It still wasn't in position, but he could clearly see a stimulated ovary. He was only able to measure 4 follicles, but said he could see the edges of a few more. Whew, I nearly freaked out there. I'm hoping that tomorrow lefty will quit screwing around and show up for picture day on time. I'm way too hormonal for these games.

Now for the numbers. My estradiol went from 41 to 354 to 773. I'm kind of scared to see what it'll be tomorrow. I have 10ish follicles and they've gone from around 8mm each to around 12mm each. Hopefully my left ovary is more cooperative tomorrow so we can get a better idea of how many follicles I have over there. Trina's estradiol has gone from 45 to 397 and her lining is getting nice and cushy for the future occupants to nestle into. Fingers
crossed that things keep going in the right direction...
Posted by Robbie at 9:08 PM

UGH. how frustrating! Fingers crossed that they're able to find lefty at your next appointment.

yeah, the drugs are no fun. it will be over soon, hang in there!

i hope your left ovary decides to cooperate at the next appointment and at retrieval. sounds like you are growing some nice eggs in there!

Hi! I started reading your blog while you were on hiatus. I just wanted to say that the same thing happens with my left ovary, and yes, it hurts A LOT with all the damn poking around! Glad there's something going on in there though. My partner and I are also moving on to IVF, and possibly even to me carrying one of her eggs, so I look forward to hearing more about your experiences!

From my recollection, the drugs for IVF were far worse than the hormones of pregnancy. And the wand was never fun, especially when they had to search for things. Things seem to be moving along nicely. good luck.

Ugh, those drugs are terrible. I recall how very full I felt as the cycle wore on. It was like I could actually feel my ovaries and that was weird. You have all my sympathy for how bad the drugs make you feel and the incredibly unpredictable mood swings. Yuck!!

Your numbers look great though and hopefully left will cooperate as her follies swell.

WELL i miss you both terribly and i know now a little bit of why we havent been seeing too much of eachother! If you ladies need ANYTHING let me know!! & Whenever you are up for some company or deeelish montrose food just let me know :D

fingers crossed for a cooperative ovary. you are doing GREAT, i know the injections suck major ass, and i remember that headache. it's a tough journey, no denying that. I'm just hoping and wishing that there's a baby at the end of this for you. :)

ugh, you poor thing! I'm so sorry the stimming has meant a full-body (and mind, and emotions) takeover. Sounds like you've got some goodies growing away in there, though! So, so much good luck to you both.

Isn't it amazing what we go through to be moms? Big hugs to you!