The last few weeks have been busy busy for us. We spent the 11th-19th in Indiana for Trina's brother's wedding. Unfortunately, I forgot my phone charger and it died 3 days after we got there. The next day, her mom's computer bit the dust. Goodbye 21st century communication technologies... :( Luckily for me there was always something to do to keep my mind off of the withdrawals. Bachelorette party, going out with friends, beer pong (i spectated), dancing (more spectating), karaoke (definitely spectated!), shooting pool, dress fittings, boat rides, family get togethers, wedding rehearsal, rehearsal dinner, setting up for the reception, the actual wedding & reception, tearing down the reception hall...you name it, we did it! The wedding was beautiful, the food was great and my wife was a STUNNING bride's maid.

The 'big day" was also our last day in town. After a brief 3hrs of sleep we headed to the airport to come home. I was REALLY looking forward to the day and a half of rest before heading back to work. I needed a vacation from my vacation! That didn't really happen. 5min after we walked in the door we were back in the car headed to the veterinary ER with my big dog, Bradley. His front left foot and leg were so swollen it looked like they would pop. He was having trouble walking and seemed lethargic. After inspecting him, I saw that half of his large pad was missing and he was raw and infected up to his dew pad. We still don't know what started it all. Possibly insect/spider bite or trauma? What we do know is his affinity for turning small wounds into large, nasty ones by constantly licking and worrying them. 2 ER visits, $750 and 4 days later he's finally starting to eat and begin healing. It'll take weeks for him to regrow his pad and to be able to walk comfortably again. Until then we have to medicate him, do daily hydrotherapy and bandage changes and keep him from losing the ground we're gaining by messing with it. That dog's gonna be the end of me I swear! 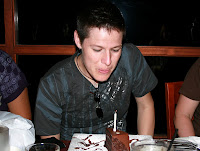 Monday, the full day of my "day and a half off"  before returning to work, was my 31st birthday. The first half was spent back in the ER with Brad who decided not to eat or move or really respond to us all night. The second half was spent worrying about Brad and his turn for the worse. Trina insisted that we still go to dinner with my friends at my very favorite restaurant then to have cake at my very favorite cafe as planned. Their cake is legendary and
she had ordered a whole amazing carrot cake and I was stoked about it. When it became apparent that dinner was running later than expected, she excused herself to go pick up the cake so we could eat it at the restaurant. She came back furious and empty handed. They sold my cake. Apparently the person who took the order didn't put the "date of pick up" on it and when someone asked them if they had a whole carrot cake, they just took the order form off of it and handed it over! They wouldn't have another one until Wednesday. She was so angry that her hands were shaking. She had to put aside the chop sticks and stab at her food with a fork. I was bummed about having to wait 2 more days for my birthday cake, but I was having good food with good friends and had the best wife a gal could ever ask for by my side. Not exactly a picturesque night, but when does real life ever go as planned? Not often in my world anyway.

In TTC news, I ordered a speculum, ok, a pack of 10, but I have a good excuse! I found a single speculum for $10 plus $5 S&H on one site and the pack of 10 was only $11 including shipping on another site. By the by, anyone in need of a plastic disposable speculum?? :) We have not mastered the art of deciphering "cervical texture, opening & position" by feel alone. Being able to visually check in on her cervical goings ons has been amazing. I highly recommend this site for anyone who has questions regarding their cervix. Anyway, we were worried that the trip to Indiana was going to eliminate our TTC chances for this cycle but our bad luck in every other part of life culminated in one good karmic turn. We got back 3 days before she ovulated. We were able to inseminate Monday and Tuesday and, according to her BBT and cervix, she ovulated on Tues. Our impeccable timing and speculum aided sperm placement just HAS to raise our chances this time around, don't you think?
Posted by Robbie at 8:59 PM 10 comments: 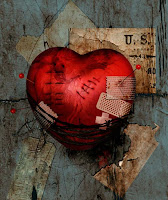 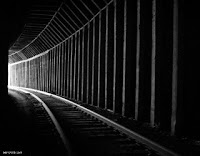 Thursday Trina's temp took a major dip and my mood dipped with it.  That night a spot of blood. We cried and held each other and mourned another cycle's passing us by. Friday, to my great surprise, her temp jumped back up and brought with it a bloodless day. What is this? A tease? A fluke? This morning brought another high temp. I'm not sure what to think. I'd already accepted this BFN and now hope is edging in. I'm doing my best to tell myself that reaching 13DPO nearly free of blood and low temps is the work of progesterone alone and not our elusive BFP. Tomorrow we test. I can't even explain the ball of anxiety I'm carrying around in my gut today. Is there a light at the end of this tunnel or is that just headlamp of the BFN train headed my way?
Posted by Robbie at 7:08 AM 6 comments: 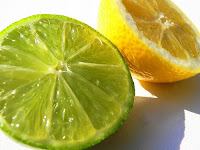 The first week of our 8th TWW flew by without a second thought on my part. This second week is dragging by at a speed I can only assume defies the laws of time itself. Somewhere along the line, Trina and I have let ourselves move from being shoulder shrugging "we'll see" to cautiously optimistic "just maybe..." to down right giddy "we're totally pregnant". Here are a few things that have led us down this happy but possibly soul shatteringly wrong path. She's had nausea and mood swings for 4 days. The last 2 days her BBT has risen, leaving us the beginnings of a triphasic chart. Thurs she bought 5 lemons and 5 limes out of the blue because she REALLY needed something sour and yesterday her boobs started to hurt. I'm aware that all of the aforementioned "pregnancy symptoms" can be explained away by progesterone supplementation and PMS, but it sure has been fun to dream.
Posted by Robbie at 7:47 AM 7 comments: