Today we had our perinatologist appointment. We were told by both our RE and 2 friends to expect the worst in regards to bedside manner. Apparently she has a reputation for driving home the "worst case scenario" speeches with little to no tact. Having the personality of an angry headgehog is the trade off for being an amazing peri who specializes in multiple pregnancies. I'm REALLY glad we had the heads up, but she ended up not being nearly as scary as we anticipated. She opened by rattling off a "grocery list" of her worries for our triplet pregnancy including everything from pre-eclampsia to gestational diabetes to cervical incompetence. She even made a comment about our choice to use my eggs due to the higher pre-eclampsia risk involved in "donor eggs". I'd never heard this, so I guess I have some more research to do. She's definitely a "no nonsense" kind of gal but we can appreciate that. We don't need someone to hold our hands, we need someone to help us grow 3 healthy babies and deliver them into this world safe and sound. Her nurse was her polar opposite in that she was really personable and talkative. I think we'll get along fine at this clinic, but I reserve the right to complain or change my mind later. :)
As for the babies, they're all doing great. Just to make things confusing, the babies are now labeled differently so it may take me a while to keep them straight. Babies A&C are the identicals and Baby B is our fraternal. If I'm not mistaken, and there's a good chance I am, Baby C is "Sneaky Pete". Babies B&C are both measuring 8w6d and Baby A is 3mm bigger measuring 9w1d. Trina had her first pants on ultrasound so that was a treat AND we got to hear the heartbeats for the first time. Until now, we've only "seen" them on screen. Today we could see Babies B&C so much more clearly. We could easily make out tiny little arms and legs. Baby B even waved at us...twice! It was SO cool. Baby A was laying sideways and appeared to be squished by the sac above so we didn't get a very good visual. No worries though, because we were assured the sac was the same size and not squished, just in a bad position for viewing.
Now for the "less than good" news. There are, in fact, only 2 placentas. This means that either our RE was wrong, or that the identicals' placentas grew and fused together. This is not uncommon. Furthermore, the identicals' placenta is lying low and partially covering her cervix. The doc said she's not overly worried yet because Trina's cervix is closed tight and there is a good possibility that it will "self correct" as her uterus grows and expands. I'm doing research on placenta previa but trying not to obsess. I figure if Dr Doomsday isn't overly concerned, then I shouldn't be either.
Here are our latest family photos. They're really starting to look like babies now!
This is "squished" Baby A. That oval area to the left with the plus sign on it is the head. You can see both little legs in the air at the right. See it? No? Squint your eyes and tilt your head. See it now? Good. :) 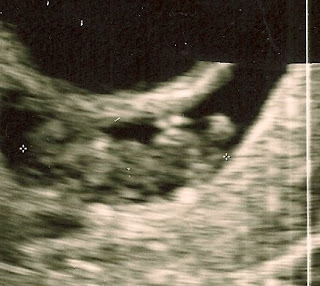 This is Baby B, the waver. This one's easier, head to the right, butt to the left. You can see both feet and even make out the most precious tiny little toes. I LOVE baby toes! :) 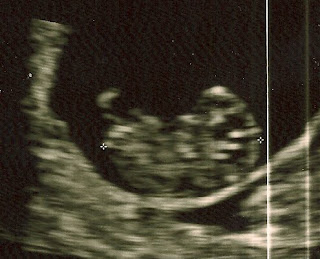 This is Baby C or "Sneaky Pete". Once again, head to the right, butt to the left. If you look close you can make out an arm. 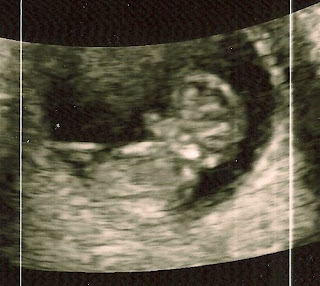 Babies!! They look like babies now. That is so cool. Glad to hear that the new doc is so competent. I agree that if she is not worried then you can breathe a sigh of relief as well.

Donor eggs and more pre-eclampsia?? I have never heard that either. Wow.

i'm glad to hear it went well! and, i could be wrong about this, but i always thought that with IVF, identicals *had* to share a placenta because any splitting done early enough to create two placentas would have happened in the petri dish. if that makes sense.

but don't worry, mine all shared one and they turned out fine. it's certainly not the worst thing in the world, just slightly higher risk.

They're gorgeous! I hope everything is okay with the placenta. They often do move up on their own.

As for pre-e, one of my midwives was talking with us after I had n, and said that new research is showing some correlation of pre-e to auto/immune issues. So, it's like the body rebelling against the foreign body within, mostly b/c of the sperm. But if that's true, then it makes sense that using donor eggs may result in some (very small) increase in risk. But the risk overall is small, and so I have faith that y'all won't have to walk that path. ;-)

Holy crap, you really do have 3 babies in there! I see the
!
Yes, my RE warned me of Pre E before discharge, b/c of the donor eggs. And I got it. BUT. I am also 40 and that raised my risk, so at least Trina doesn't have that added bonus weighing on her. The thing with Pre E is that you will either get it or not but there is NOTHING you can do in the meantime so try not to stress. Just read up on it so you are aware of the symptoms and can act fast if need be.

They were worried about my placenta early on as well at 16 weeks. Way too early to worry and I wish they hadn't even told you b/c so often at this stage it corrects itself.
Glad you have a great doctor, very important!

i appreciate that too. when people tell it to you straight. then you know what will come, and cant say she didnt say anything before, kinda thing.

baby b is going to be a soccer player!! kick kick!

What beautiful family pictures! They are amazing. Interesting information on the single placenta.

I have been following your blog and am so happy for you guys. Your babies look amazing. It is great that you have a doc who isnt going to beat around the bush and leave you in the dark. Its good that you appreciate that straight forward personality in a person. I agree that you should do your own research. It is best to be as informed as you possibly can. Keep the faith and really enjoy this journey because before you know it, you'll be in the delivery room :)

Great family photos! The babies are beautiful already. The babies look great, and I love that they're waving at you. So sweet! Glad your doctor is knowledgeable, too.

Wow, this is amazing! What an exciting day to be able to see all three so clearly. Thanks so much for sharing the pics.

The pictures are amazing. They really do look like babies now. Im glad that your peri wasnt as bad as you anticipated. I agree that you reserve the right to change your mind at any time! :) My fingers are crossed that the placenta previa fixes itself.

Look at your beautiful littl babies! WOW! So excited for you!

They are adorable!!! I'm happy to hear it all went well with Dr. Doomsday. ;) Is Trina showing yet??

My identicals shared a placenta too and they came out ok. Glad to hear everything is going well!!

I had previa issues as well. As my dr told me.."what are you going to do about it? worrying won't make it go away". I was having a c-section anyway so I left it up to him to worry about it.

Keep up the good work mamas.

The babies look great! I can clearly make out all their little parts.

I agree with you on the perinatologist. The doc that did our CVS was a total ass but he is supposedly the best in town according to everyone and that's all I really cared about.

I'm so happy to hear all is well. Hope Trina is feeling a little better as well.