Our peri has estimated that the boys weigh 7oz each which means they're measuring 4 days larger than their gestational age. This is very good news. It's also good news that they are all the same size. Watching the ultrasounds is amazing, but it's getting more and more confusing for me. There just seems to be a mass of tangled limbs. I don't know how the tech or doctor keep them all straight. Hands, arms, feet, heads and butts are everywhere. This time the boys were all positioned in a circle with their heads on the outside and their legs towards the middle kicking the crap out of each other. It was like a violent synchronized swimming routine. They were really doing a number on each other. Trina even asked if they were SURE there was a membrane between them. The nice tech pointed it out to us and explained how it was loose and stretchy so while the boys were safe in their owns sacs, they had no trouble encroaching on each others territory. My guess is that will probably never go away. I can hear it now "Mooooooommmmmm! He's TOUCHING me!!"
You'd think that after being tethered to her medication pump for a month now that Trina would be more aware of it. She's not. Anytime she sits down, she sets the pump next to her so she doesn't have to wear it. At least half of the time when she gets up to leave, she forgets it's attached until she runs out of line and feels the catheter tug. Sometimes this is too late to stop it from hitting the floor and ripping the site out of her leg. Wed she tried walking away from the ultrasound table without the damn thing and I had to catch it with my lightening fast reflexes before it dropped to the ground. I was like a ninja! Twice now she has ripped it out while lowering her pants in public restrooms. Now we can not leave the house without an additional site kit, alcohol swabs and bandaids. The sites we can replace with little concern, she has to move them every 12 hours anyway, but if she breaks that $5000 piece of equipment, I may cry.
17 Week Belly, 41.5" 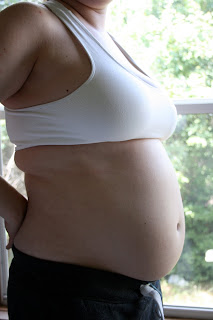 Lol. I love the image of the synchronized swimming brothers in Trina's tummy. And yes, I think you should start practicing breaking up arguements now! As for your ninja reflexes, well done. $5000 would certainly make me cry.

Hey, we are the girl triplet dads! I agree that the u/s look like a tangled mess and it's hard to tell everyone apart. How is Trina doing? Us followers would love to hear a small blog post from her! If she's up to it. Sounds like things on the ultrasound level are going really well! So happy to hear that. Wishing you all a happy, safe and LONG (Sorry, Trina!) pregnancy!!

Well done describing the fetal movements of some big ol feisty boys. and I have to agree with you...they come out with the notion to fight with someone :) ha ha
So glad everything is going well. What a great looking belly. I can't wait to see it in full bloom.

I am so so happy to here about the boys' progress!!! LOL trina WOULD forget about tht damn pump! Goodness i miss you ladies so much its like it NEVER goes away the missin, nope it doesn't! Well i got a new phone so i lost you're number and Gena is in GA for AT until the 18th so whenever you can shoot me a text message, hopefully soon we can get together and see you ladies and the boys! ahhhh we are so excited beyond belief!

Look at those babies go! You're right, the kicking and touching will never stop! Sounds like things are on the up & up, good job mommies!

wow, i still cant really believe ya'll are having three boys! i bet seeing them all on ultrasound is amazing! glad to hear all is going well.

"Wed she tried walking away from the ultrasound table without the damn thing and I had to catch it with my lightening fast reflexes before it dropped to the ground. I was like a ninja!"

It sounds like Trina is doing well, I hope you will be able to return the pump before it's broken! :)

How can someone NOT believe in God after witnessing an ultrasound. Especially one with 3 babies in it! :)

Glad she and babies (and you of course) are all doing well! Just wait until those babies are REAL big and all you can see is smears on the screen and it looks like NOTHING. Butts on heads and legs intertwined... its very amazing.

Have you seen the Discovery Health series called In the Womb? There is one show documenting multiples pregnancy in humans and it is amazing. They filmed a set of twins-one was dominant and kind of a bully and the other was more passive. The passive twin would cover his head and burrow lower in the uterus. They had the same personality 4-5 years later. The passive twin would go to his bed after a fight, cover his head and burrow in. It was very interesting. Maybe you can find the show on u tube.
I love watching that belly grown! Tell Trina hello.

so glad the boys are doing well! Love the belly pic!

Wonderful update. I was wondering how everyone was doing. Glad to hear you are mastering your ninja skills now as I'm sure they will come in handy in the future. Everyone keep up the marvelous work!

Ha! The visual of the three of them flailing at each other cracked me up. Good to know they're healthy! ;)
The clutziness only increases from here, I think! I drop stuff constantly. Hopefully she won't have to wear that thing too much longer. She looks fantastic--love the belly shot!