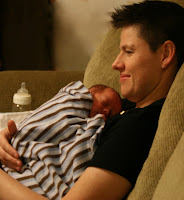 Our boy Simon was finally released from the NICU. They told us he could come home 4 different times, but there was always something that popped up and held him back. First he started having spells of apnea (no breathing) and bradycardia (slow heart rate). He needed to have have no "A's" or "B's" for 5 days in order to come home. Then he failed his sleep apnea study. It showed that his oxygen levels went down during feeding. They were going to send him home with an oxygen tank to use during meal time. This seemed preposterous to me considering he is our only child who has never been on oxygen. Ever. Then a doctor decided it may be a feeding problem instead of a breathing problem since he had a history of that. They did a swallow study that showed he was actually aspirating a little bit with each swallow. No wonder his oxygen went down, he was drowning. They found that if they used a thickener in his bottle, he did much better. He's on 2 reflux meds, 1/2 reflux formula, 1/2 breast milk and now a thickener. He's a bit of a slow poke eater and he takes forever to burp so feeding time can be drawn out for what seems like hours. He just can't be rushed into anything. Our boy runs on island time. :)
Posted by Robbie at 12:29 AM

Yay for homecoming #2. I know you'll be so much happier (and less tired) when you no longer have NICU trips daily. That pic is great and it sounds like Simon is doing great.

Aww he's so cute.
I know things must be a little rough right now. But looking at his little angelic face makes it all worth while doesn't it?

That little baby (and the other two!) will rely on you to protect them.
Ahh your a parent now. Congratulations. =]

whoo hooo 2 out of 3 !! Your little or should I say big family is almost complete!

oh, that is just the most beautiful picture ever :)

Well that made me cry...

Geesh, y'all have been through a lot! Sending even more prayers, good thoughts, good juju- anything I can! He is absolutely beautiful.

I've been following your blog for some time now and I'm thrilled that your boys seem to be doing well. :-)
One question which I just have to ask: Which one of the boys was "sneaky pete?"!

As far as we can tell, Linus is Sneaky Pete. He and Simon switched positions so many times, we can't be sure, but that's our best guess. :)