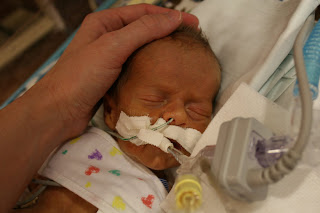 Those pleading looks shatter me. 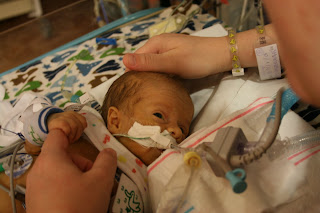 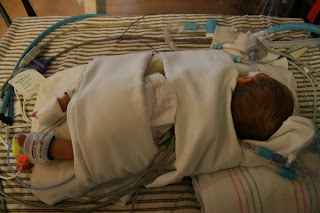 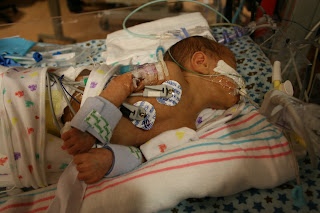 Holding Linus for the first time. 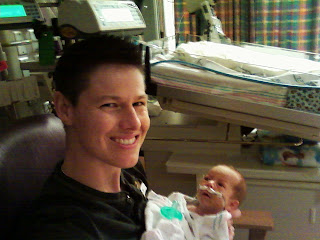 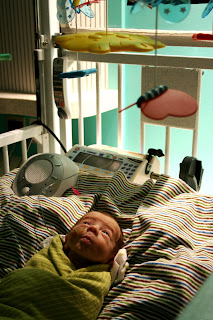 So happy to be in his mother's arms and not in the CVICU. 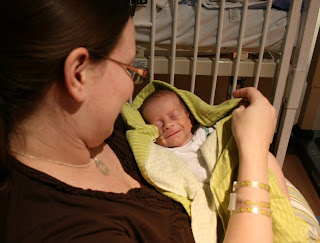 What a brave little Linus you have! I don't think you'll have to call him Whinus like we do. :P Love, love, love the pictures! I hope he continues to improve, maybe a bit faster so he can be home with his mommies and brothers.

That last picture is absolutely PRECIOUS. Praying for all of your sweet babies.

I'm so sorry I haven't been commenting, but I've been reading along and hoping for all of you. Your boys are so very lucky to have you and you are doing a wonderful job. Linus is such a trooper and I hope when he's a running laughing toddler all of these painful days are nothing but a distant memory for you and a scar to be proud of for him.

He sounds like he is a fighter. This post made me so teary! What a brave little boy!

You guys are an amazingly strong family! Poor little Linus is having to be such a fighter and I cannot even imagine the exhaustion that the mommies have. I hope that he continues to improve and make those baby steps to a full recovery.

Ah, I'm crying at my desk. I made it through the whole post without a tear and lost it when I reached the pictures. I am in awe of Linus' strength. what an amazing little fighter you have. He is so beautiful.

What beautiful pictures, what a beautiful and brave little boy. (And brave mommies.) I can only hope that this go-round is much easier than the last one. Keeping you guys in my thoughts.

Crying like a baby here (5 months preggo hormones don't help, but I think the tears would have come anyway.) Thanks so much for sharing your story. wishing all the best for Linus and the rest of your beautiful family.

That is insane. So sorry you had to go through all this! You're one strong chick!!!

He is just beautiful.

wow. You have been through SO much, as has Linus. I think of him often and hope for continued recovery and health to come.

AHHH I hate "To be continued"! As always, we love hearing about the boys. Linus is always in our prayers (as are Dex and Simon). I just got back from Vegas and I'll email you tomorrow. *hugs*

Sweet Linus. I can see where he gets his strength from. What a time for you two mamas.

Keeping fingers crossed (and sharing your tears) on the other side of the Atlantic Ocean - all has been said in the other comments, and more words don't get you your son home any faster.
Wishing you all lots of courage to hold on and looking forward to reading "home coming 3", hopefully soonish!
Warmest regards, Jade

Goodness, what a tiny little warrior! Praying for little Linus as he continues to fight this battle, and for better news around the bend!

You guys have been in my thoughts. I am a NICU nurse and have done a little PICU work as well. I am sorry you have been on such a rollercoaster...hang in there. I see miracles happen every day!

man that kid has been through so much in a short time. and so have you ladies! I am really praying that everything turns out ok and that he continues to improve. thanks so much for sharing your story and especially the pictures. your boys are just the most angelic looking little loves!

I love reading your story and look forward to the next installment. Your love for your sons shines through in your words and photos. You are a blessed family.

Wow, I admire your strength and absolute love for your (not so little) family. I wish you a lot of strength to keep going and that Linus will be home soon. :D

I'm crying my eyes out thinking about my own babies and how heavy all of this must be for you.

Wishing all of you strength, health and happiness.

I already left a comment on this post, but just wanted to say that I think about you a lot.
Sending you plenty of positive energy from far away (am sure you're getting plenty from close by as well),
regards, Jade