We have been going to the park on both of my days off each week. I think our boys are addicted, especially Dexter. Today we were there for just over 2 hours. The boys were exhausted so we put them down for a nap as soon as we got home. The first thing Dexter said when they woke up was "Play on the playground? Yes??" No buddy, not until Tuesday. They have so much fun there and they exercise nonstop. I am thrilled that they want to be outside so much. In between trips to the park we are trying to take them out in the backyard every day, too. We put up their little climber and are building a sandbox to make the yard more fun and kid friendly. Hopefully my next post will be about it being completed! 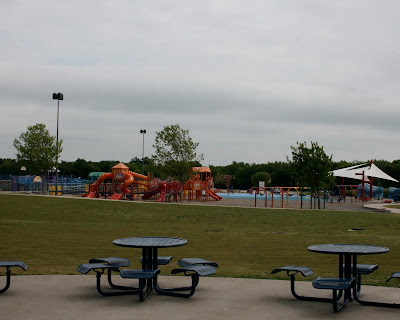 This is a picture of the super awesome, addicting playground. It's huge and this doesn't even show the 2 ponds or all of the sporting fields! 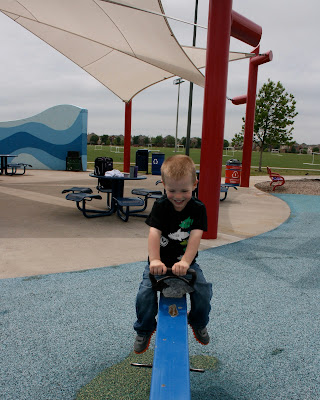 This teeter totter does not go crashing to the ground if your partner jumps off. Simon will never know the betrayal of his brothers setting him up for failure and a hurt butt. 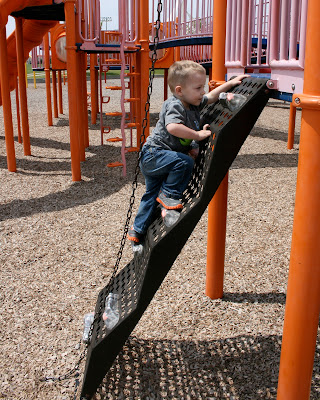 I can hardly believe that Linus only recently graduated from PT. This kid climbs like a monkey! 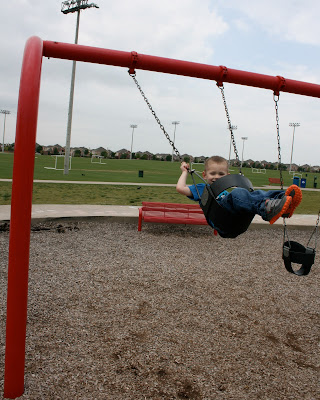 Dexter was a maniac with the swings wanting to be pushed higher and higher. 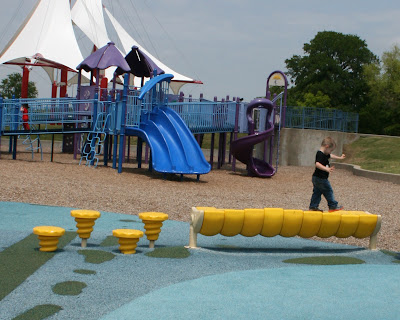 Simon has some serious balancing skills. He went back and forth over this thing several times and never fell. 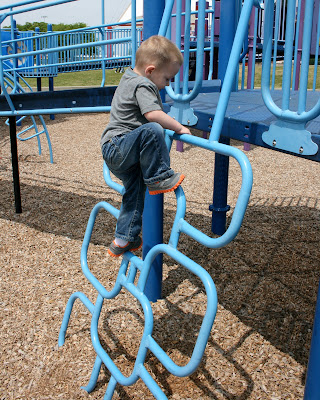 More climbing from the monkey boy. 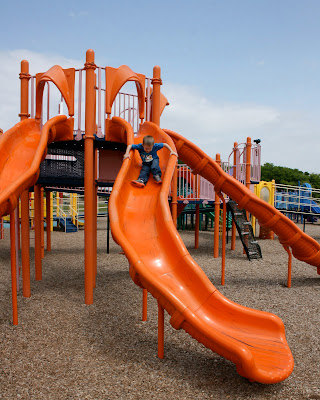 I was really proud of Dexter for going down this tall slide. He's a bit more apprehensive then his brothers about such things. 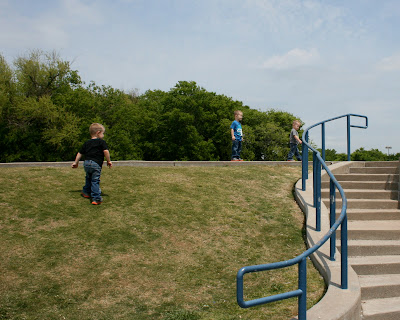 All 3 boys kept going up this hill then down the stairs. Not sure what the big attraction was, but they sure had fun doing it. 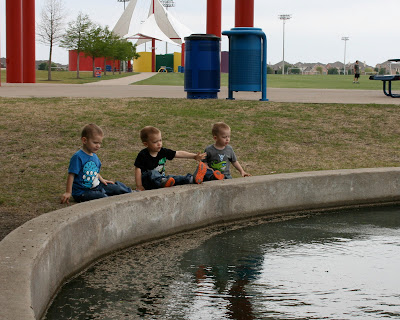 The whole time they were at the water's edge, they were throwing dead grass clippings into the pond. One duck swam over to see if there was anything edible, but quickly left. We saw 6 ducks this trip. Next time we are definitely bringing them some food. I can't wait to see the boys faces when they come over en masse!
Posted by Robbie at 6:45 PM

Love these pictures. I need to take my kid to the park more often. Oh how I love a post-park nap!

I love watching these three grow up. I can't believe how quickly it happens! My boy LOVES the park as well. Can't get enough of it. Such fun times and I agree, nothing beats the nap afterwards!

Wow, they sure are getting big! My kids are park addicts too. The worst is when they see a really cool swing set in someone's back yard and don't understand that it's not a park where they can go play.

I love my kids having fun outdoors. For them to have more time for this, I help with homework, sometimes even using homework help online services.

So happy to see your baby Linus (and your other sons) doing great! I happened across your blog, looking for pediatric chest drainage cases (I'm studying to be an NP). I got caught up reading your story. Again, very happy he's better :-)

HAPPY BIRTHDAY boys!!! Hope you have a great day!