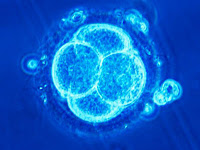 Trina didn't have any pain today although she says she still doesn't feel quite normal. All this pain and worry will be worth it if our egg(s) are starting to look like the picture to the right. We're both trying to stay upbeat and hopeful for this two weeks of waiting. No point in guarded optimism or all out pessimism now, it won't make it any easier  if this try was a bust. So multiply on little cells, make me some twins! :) Now for the question of the day.
Question#2: How or why did you choose your donor? Looks, personality, availability, a little of each? 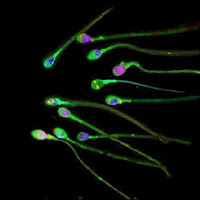 Our Answer:
Trina and I decided to go with an anonymous donor for two reasons. Firstly and probably most importantly, we couldn't think of anyone we knew that would be willing. That makes for an easy choice. I also worried that if we did choose a known donor, that things would be too complicated. There were so many "what if's" in my mind. What if it was so awkward that our present relationship was strained? What if he decided he wanted more to do with my child than we had agreed on. What if people thought of him as the dad, not just the donor. When would we tell our child who their bio-father is? Would we tell anyone else before then? So anonymous donor land here we come.
We chose our donor by looking for someone who would best represent me, the non-bio mom, genetically. Our donor is tall, thin, has dark hair and blue eyes like yours truly. That's where we started our search. Then we looked at personality. His is very similar to mine in that we have the same favorite animal in the zoo, we had both recently read the same book and his sense of humor is not unlike mine. I really liked that part of his personality was unlike mine, but in a good way. He is said to have great patience. I couldn't have less patience if I tried, but I wouldn't try because I don't have time for that crap. :) It went even further than that. His father is built like my father. His sister played the same instrument in band as my sister. He's an animal lover and a respecter of nature. We had a similar story of childhood shenanigans. All in all he's alot like me, but with sperm. Expensive, make-my-wife-wanna-die-from-cramps-and-nausea inducing, baby makin sperm.
Posted by Robbie at 9:01 PM

Great question. We chose for many of the reasons...sperm-bank swimmers b/c for us, known donors are way too complicated when our lives and "life style" are complicated to begin with. We also started with red hair (non-bio mom #1 trait) which is HARD to find in vast quantities. Higher Education and family of professionals speaks strongly to us their values/professionalism/etc, ethnicity (Irish, English,Scottish) and height (at least 6ft) to balance out my shortness!

It sounds like you picked a really great donor!

We ended up going the known donor route for many reasons. One major reason was because of the money, the other reason was because the chances of getting pregnant were greater with fresh than with frozen. We also wanted to know what our donor looked like and not guess his looks just on a baby picture or a description from the sperm bank. So after doing some research and filtering through the crazies, we found our donor. Our donor is a 48 year old gay man who has been in the same relationship for 13 years. He is smart, has a great personality (a lot like mine), and comes from an excellent medical background. He was tested and went through a SA before we used him. He has also helped out two other lesbian couples. One of the couples has a beautiful 2 year old girl and the other couple is still pregnant. He has no desire to be a part of the child's life. And he's proven this from the first couple he helped. Coming across a great known donor is hard, so I feel we were lucky when we found him.

We wanted sperm bank sperm...we chose a willing to be known donor (when our kid is 18 he can contact the donor) because we thought this decision was in the best interest of our child. We didn't feel like we had the right to take that option away from our child, so if he wants to know his donor then he can.
We also wanted similar ethnic background to non-bio mom, although this became less important when picking the second donor.
And we wanted to know that there had been successful pregnancies and this became more important when looking for the second donor.
Also, like Jen, higher education and familial professionalism were important.

We chose an anonymous, non-ID release donor for pretty much the same reasons as yours. His physical traits are most like mine (the non-biomom)- red hair, blue eyes, on the shorter side. He was smart enough and introverted enough to balance out the biomom's extraversion :-) Seemed like a good mix. And he was CMV negative since biomom was also negative.

I love the questions! We chose an anonymous donor for the same reasons you did. Since my fertility was in question, it was very important to us that the donor have previous confirmed pregnancies. Next in order of importance was his medical history and, although we'd wanted someone who resembled the non-bio mom, it turned out that we had to compromise on that criterion in order to get the (more important) first two. I just couldn't see myself explaining to our child someday, "Yes you have allergies and an increased risk of heart disease, but you have the same hair color as mommy!"

We went for a kd - I did a massive post that overflowed into 3 posts a while ago explaining how/why we came to that decision. If you want to read the links are here:

We didn't really have any known donor options we felt comfortable with. The story of how we ended up with our sperm bank donor is kind of strange and a bit complicated. I may post about it someday but it would take a lot of space in your comments. I will tell you what we liked about him. He is tall and thin, hopefully to even out my short and sometimes not so thin. He was funny and very bright. I am very artistic but not great with numbers/spelling/history and he is a biochemist and valedictorian so we hope our child will get the best of both worlds. He was down to earth, socially responsible, close with his family, intellectual, upbeat, free spirited and adventurous. He had a great personality and seemed like the type of person we would choose as a friend IRL. My wife's ethnic background is a mystery because she is adopted (she is a European mutt we think) but her adoptive family is Polish and he has a Polish background. He kind of fell into our laps and fit all the requirements we had.

I remember laughing when you commented once that both our donors are tall and thin with brown hair, blue eyes and dimples and could be one and the same. I can assure you though that they aren't the same person, although that would be hilarious.