This weekend we took our annual beach vacation. Due to Trina's semi-constant nausea, we didn't do much other than lay around the cabana and relax. It was great! We ate at our favorite breakfast burrito place every morning and grazed all day as Trina's stomach allowed, or demanded as the case may be. I can't tell you how many times we stepped into a restaurant then quickly walked back out due to a "fishy" smell. Trina's super sniffer is VERY particular these days. One little whiff of something foul and she's retching. Trina has now vomited in several places all over Pt. Aransas, but NOT on the beach so points for her. :) There were so many drunk people at Sandfest, no one even noticed one extra puker in the crowd anyway. We walked down to the sand sculptures only once as it took a lot out of Trina to make it that far. Add the "fishy" beach smell and it wasn't nearly the "fun in the sun" we were going for. Instead, we sat by the water across the island and watched dolphins play in the bay near the ferries and marveled at the flocks of pelicans flying overhead. I didn't even know pelicans "flocked". I've only ever seen them solo or in very small groups of 2 or 3. All in all it was a great getaway that we needed badly.
Today we had another appointment with our RE. Trina vomited so violently as we were waiting that it came out her nose. How utterly lame is that? My poor wife. The babies were SO active. I couldn't believe it. All 3 were dancing all over the place. Here I was so amazed by a little wave last week and today it was like a disco in there. Baby A appeared to have hiccups. Is that even possible at this age? I'll have to check into that. During the wanding our RE casually asked how our Peri appointment went. I mentioned that she told us the identicals shared a placenta and that Trina had a mild previa. His face darkened and he asked how she determined they shared a placenta. I told him she did an abdominal u/s and then proclaimed it to be so. :) He muttered a bit about it being too early to accurately see the actual placentas and took a good hard look at the identicals. Once again he followed the umbilical cords from the bellies until they attached at 2 very different places in their sacs. Basically he disagrees with her "placental assessment." Oh well, only time will tell. The most important thing is that they are all measuring on track and have great heartbeats. Not to mention they're pretty snappy little dancers. :)
They took good pictures of everyone, but there was a snaffoo in printing them, so we ended up empty handed. :( We were told they'd have them printed for us next week. I sure hope so because they were really cute... Since I have no baby pics to share, here are a few mama pics. Both belly and boobs are definitely growing!
6 Week Belly 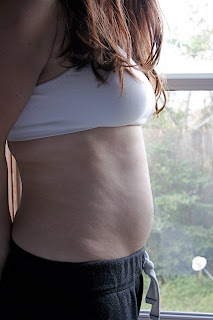 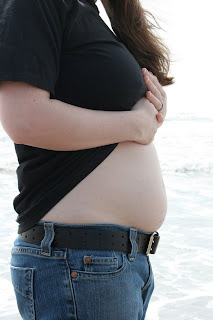 Sounds like your beach trip was good minus the vomiting. Glad to hear the babies are doing well and I hope you can get their pictures next week!

Poor Trina but it sounds like she is handling it like a champ! Her belly shots look great! Thank you for sharing. :)

P.S. This is Becky of 2momswithaplan. :)

You have a disco on your hands. It is good to get some r & r when you have a secret baby making factory tucked away! Glad to hear everything is great.

I wish Honey and I could have had kids together, but six between us was enough!! I am so glad all is going well!!!

I wish I could see them all dancing! Love the belly shots. Poor Trina - I REALLY hope her nausea quiets down soon.

the little widget on the side that shows 3 babies floating around is kind of crazy! sooo cool.