I have mentally written, edited and rewritten countless hilarious blogs, unfortunately I never actually typed any of them up and 2 weeks have slipped away. This blog will be informative but largely uninspired.
Last week Trina was finally weaned off her Z0fran pump and is now tube-free. Gone are the days of yanking catheters out and attempting to walk away from expensive machinery that is attached to one's self. The low level of constant nausea she is left with is much easier to deal with than the violent heaving she started out with. Luckily acid reflux has filled in for some of that missing misery. She's now on both Nex1um and M@lox daily. They take some of the edge off but neither have stopped the occasional burst of acid from reaching the back of her mouth or allowed her to lay down within an hour or more of eating. Speaking of laying down, this is about the only comfortable position she can find. Not just anywhere, in bed with a mountain of pillows and props. Standing for more than a few minutes causes major low back pain and sitting is agonizing for any amount of time. Even laying on the couch has become tedious at best. Her belly is now tight as a drum. It's hard to believe that it will get larger than it already has. With everything she's enduring, I can't imagine how she manages to keep such a cheery disposition. She's such an amazing woman. I'm in awe of her. The only thing she complains about is not being able to feel the babies more often. When she concentrates on her body and wills herself to feel them, all she picks up is her heartbeat thundering louder and louder in her ears. At any given time she can feel it in her fingertips, her scalp, her belly, everywhere. If she sits still, she's gently rocked by the force of it. It's insane. Her pulse raced up to 112 beats a minute the other day just by making a PB&J sandwich. Apparently pumping all that extra blood is quite a job.
We got to see the boys at last Wed's peri appointment. They're perfect in every way. Seeing them on screen is just as fascinating as the first time. They are now measuring 4 days ahead, 2 days ahead and right on schedule, respectively. When the tech put the wand to Trina's belly, a mass of tangled limbs popped into view. I was still trying to make heads or tails when she yelped "Oooh, look!" and zoomed in on Baby A's cherubic face "Wait for it...". I was gazing lovingly when out of the blue a tiny foot came down and kicked him in the head, then again and again. His little noggin rocked from the force of it. The tech giggled and made a comment about how we were going to have our hands full. For nearly the whole scan Babies A & B were trading punches and kicks. Baby C on the other hand was lazily stretched out on the top bunk minding his own business. I wonder how this will all translate outside the womb...
19Week Belly, 42", +20lbs 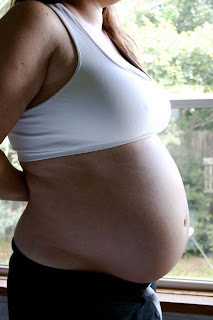 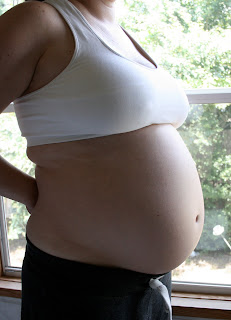 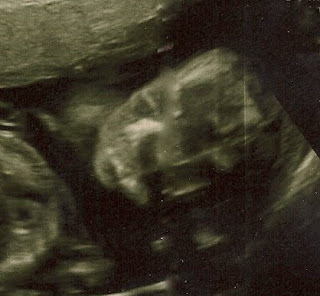 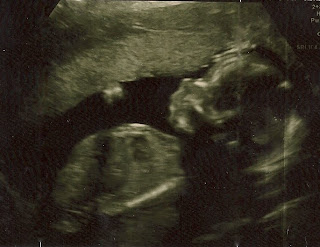 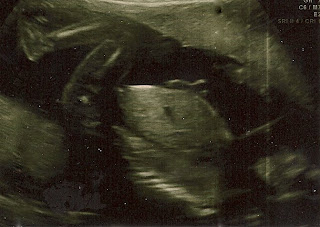 wow... isnt it all just amazing! i love to read your blog when you post. happy that the boys are doing well and getting to know each other on the inside. lol..

Ahhhh nexium and malox. This house remains in gratitude to those meds as well. And poor Trina with all that baby weight (in terms of making everything uncomfy). She must be quite the trooper. Joey also just mainly feels flutters and these are usually at bedtime. I was thinking that between your house and mine, we have a nice first string for b-ball. Maybe we can find a few more ivfers to throw in a few boys so that our team has depth? ;)

so glad to hear that your guys are doing well!

So nice to read the update! I'm happy Trina is finally getting some relief, although damn the heartburn for sneaking in there like that! The three little guys are quite adorable already. It's pretty clear that you will most definitely have your hands full when they're on the outside.

Wow how amazing. I hope your love can keep enduring all this. I am sure it will be well worth it in the end. And how funny about the ultrasound. It does sound as if you are going to have your hands full.

So glad everything is still going fairly well (besides her being uncomfortable as all hell!) If you havent all ready get her a big heating pad for her back, that helped so much with a lot of the aches and pains.

glad to hear all is well. i was getting worried for you since u had not posted in a while. good luck!

Love reading your blog! Let's me know what I potentially have to look forward to...I'm about 5 weeks behind you with my triplets. Glad to hear she's weaned off the Zofran...only to wean onto Nexium and Maalox haha. Keep a cooking!

Yes, so glad to see everything is going well. I'm 22 weeks with my IP's triplets, and I know exactly how she feels about the whole breathing thing. I don't even want to think about the next couple months... how am I going to do it?! Acid Reflux does suck, and it just gets worse. But she looks amazing... keep up the awesome job!!

Glad to hear she's doing well off the pump, too back about the heartburn and discomfort. Great update and pics!

Wow! You can really see a huge difference in week 19 and 20 tummy. At how many weeks do your docs want the wee men born? Because I take it at least that your more than halfway through! Well done Trina! :-D

WOW those babies are perfect and gorgeous in every way! I can not wait for the baby shower!! I'm really upset that we couldnt end up having it at my house :( sunday nights are so hectic here! I love and miss you both!

i love those pics of the boys!!! Ive been stalking your page to get updates, so glad you posted! Also glad Trina is doing a bit better. she is such a trooper!