Taking pictures of two boys is so hard, we are totally screwed when there are three. :) You can see Simon's bald patch behind his ear. One of four that the nurses shaved into his head for IV's. I'm sure they're great at their job, but they suck as beauticians. :) 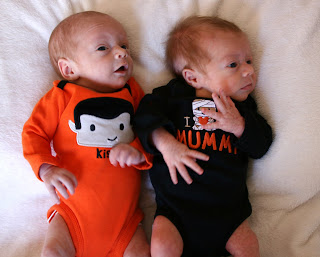 Simon looks like a baby werewolf to me in this photo. Maybe it's the pointy ear and unruly hair. :) Dexter was being so sweet and cooperative. He finally just fell asleep while we maneuvered Simon. 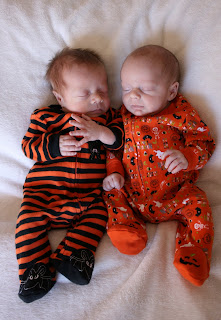 How precious are these brothers? They were fussy after the photo shoot so I was rocking them. Dexter reached over and grabbed Simon's hand. I know it was coincidence, but it looked so purposeful. He held on for a really long time, too. (Please look away from the disheveled woman with her shirt on inside out. Nothing to see there...) 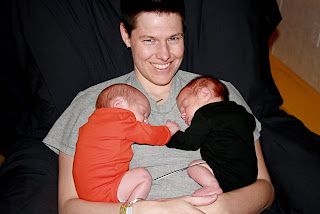 Not only was Linus's onsie WAY too big, he was not in a position to be messed with. I had big ideas of cutting the back out and splitting the sleeves to do a wrap around kinda thing. Negative. He was calm and on his side. Blanket onsie shot it is. 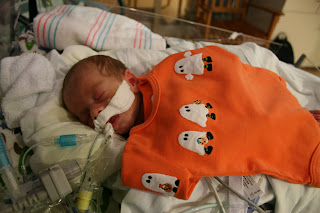 A bib his Cousin Bailey sent to him. Everytime I laid it gently on his chest he flung it off. Point taken. Set it next to him to snap the photo. :) 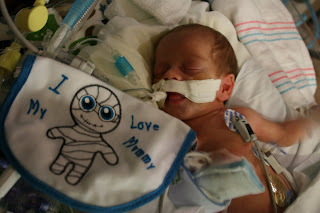 Happy Halloween.
Your babies are so adorable.
My prayers are with you and your family.
Hope you have all 3 babies at home soon!!
And when you do.. good luck!! =]

Oh my, they are adorable. It is so wonderful to see that you're all doing well. Its only a matter of time before everyone will be home and you'll be looking back on this instead of being stuck in the middle. Who knows what kind of emotion it will evoke, but hindsight generally seems to be kinder than reality.

Sending many prayers and warm thoughts your way!

SO beautiful.
Thanks for sharing.

awwww!!! the one of them holding hands melts my heart! happy first halloween boys!!

no dishevelled woman - more of a radiant momma with two sweet peas!

(Just happened upon your story rather randomly, and pray for a good outcome for the third little pea)

I love that Linus is already being stubborn. Shows what a fighter he is!

Happy Halloween to the three strongest boys and two strongest mamas I know!

what a wonderful halloween photo fest. i am praying for your family. everyone will be home soon then the fun trio pictures will begin :)

Oh my, you have me crying again - but I loved the "dishevelled look"-mother: you are just doing so great and reading about the inside out shirt made me laugh : you have a great sense of humour, it is definitely part of your strength and useful to have when everything seems to be going against you (which it is very often indeed). I remember being dishevelled for a very long time and I only had one baby, with no health problems at all...
And no way I had any pictures to post on the internet!
They are absolutely adorable and I look forward to Christmas for the next shoot...
Plenty of positive thoughts for you all, Jade

I came across your signature on BBC and stumbled into your blog and what an amazing story. You guys are such great moms already and you don't even have all three boys under one roof yet. Your best adventures are ahead, congratulations and keep up the great work. I hope Linus is home so soon!!!